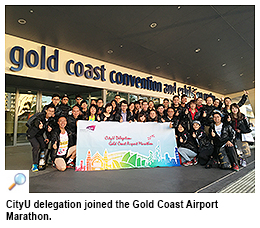 A delegation from City University of Hong Kong (CityU) comprising some 35 top staff, students and alumni runners participated in the 2016 Gold Coast Airport Marathon on 2 and 3 July.

Professor Matthew Lee Kwok-on, Vice-President (Development and External Relations) and Head of CityU Delegation, thanked the generosity of alumni and external donors for their support for the event, and also cheered for the CityU team for their enthusiasm in joining the race. He encouraged the team members to participate in the race with a sporting spirit and perseverance to demonstrate the unity of the CityU community.

All of the CityU runners successfully finished the races with lots of team spirit on the two sunny days. The CityU Delegation was awarded the “Largest Overseas Team – International Friendship Award”. 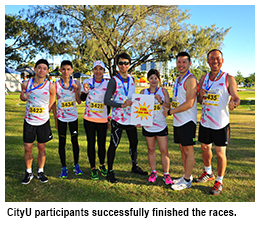 The delegation was jointly organised by the Alumni Relations Office (ARO), Student Development Services (SDS) and CityU Marathon Club. This was the fourth time that CityU formed a delegation and joined non-local marathon, with the aims of promoting marathon spirit and healthy lifestyle advocated by the University. The delegation earlier participated in marathons in Taipei, Gyeongju of South Korea and Xian in the mainland.

Professor Lee expressed his delight at the reunion dinners and invited alumni residing in Australia to come back and visit their alma mater to learn about recent developments.