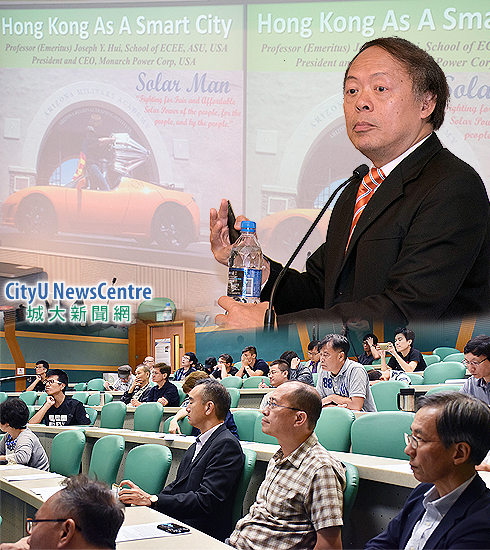 Hong Kong should turn itself into a smart city by developing advanced, clean and stylish energy, suggested Professor Joseph Y. Hui at a distinguished lecture for the Institute for Advanced Study at City University of Hong Kong (CityU) on 6 July.
Professor Hui suggested improving Hong Kong’s air conditioning by removing humidity by compression and creating cool air by air expansion, which does not require harmful refrigerants. In addition, supercars could be powered by super-capacitors instead of batteries.
Professor Hui is the President and CEO of Monarch Power Corp and serves as Emeritus Professor of the School of Electrical, Computer and Energy Engineering at Arizona State University.
In the lecture, titled “Hong Kong as a Smart City”, he introduced the Firefly technology he invented. The technology, based on his patented turbine and compressor, generates combined cooling, heating, power, pressure, work and water (CCHP2W2).
He also talked about his “Kai Tak Fantasy” plan, which is a smart city model for Hong Kong. In the plan, a Micro Firefly is used for homes and cars, a Mega Firefly is used for commercial buildings, and water generated from the air is used for hydroponics farming.
Professor Hui focuses on energy research and has filed more than 10 we-fit patents. He is a Fellow of the IEEE and HKIE, and received the Presidential Young Investigator Award from US President G.H. Bush and the IEEE Charles Bennett Prize Paper Award.