Learning traditional Chinese martial arts has a direct bearing on reducing aggressive behaviour among schoolchildren, according to a recent study conducted by City University of Hong Kong (CityU). 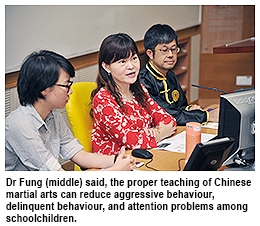 This is the first scientific study undertaken to evaluate the impact of Chinese martial arts on young children. The study involved a sample of 315 children from 6 to 12 years old from different schools and social strata.
“The findings reveal that the proper teaching of Chinese martial arts can significantly reduce aggressive behaviour, delinquent behaviour and attention problems among schoolchildren,” said Dr Annis Fung Lai-chu, Associate Professor in the Department of Applied Social Sciences at CityU.
“Many people, including some of the novice learners, see Chinese martial arts as merely a skill set for hand-to-hand combat,” explained Dr Fung, the Principal Investigator of the project, “but the essence of this part of our cultural heritage lies in its code of ethics (wu de).” 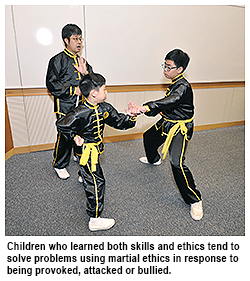 “The children learn how to fight in order not to fight,” said Mr Toney Lee Ka-hung, the Co-investigator of the project, who is also a graduate of the Applied Psychology Master Programme at CityU and a registered social worker.
The CityU researchers shortlisted 244 boys and 71 girls among 3,511 schoolchildren from 12 primary schools and one children’s home, who completed questionnaires on aggressiveness. The children in the final sample, comprising 315 children, were then randomly assigned into four types of intervention groups: i) martial arts skills only (85); ii) martial arts ethics only (77); iii) a combination of skills and ethics (79); or iv) physical fitness only, which served as the placebo group (74).
Each group attended 10 sessions, and the participants were assessed on reactive and proactive aggressive behaviour, delinquent behaviour, and attention problems, before and after the training programme.
“In the group combining skills and ethics, we found a significant reduction in aggressive behaviour in the post-test assessment,” said Dr Fung. Reactive aggression, proactive aggression, delinquent behaviour and attention problems among this group dropped 42%, 65%, 55% and 40%, respectively ( diagrams of the findings can be found by clicking this link ). 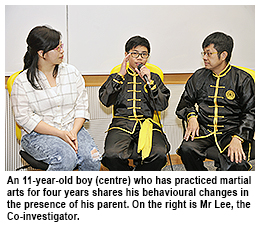 While the skills and ethics group had the best outcome, the findings showed a reduction in general aggressive behaviour in both the ethics-only group and the skills-only group of 29% and 34%, respectively, after the intervention. The delinquent behaviour and attention problems of children in the skills-only group also dropped by 36% and 28% respectively. However, no statistically significant changes in delinquent behaviour or attention problems were observed in the ethics-only group.
Compared with the placebo group, the group combining skills and ethics had the strongest treatment effect.
Group members who learned both skills and ethics tend to solve problems using martial ethics – i.e. they preferred to use non-aggressive methods and self-defence skills in response to being provoked, attacked or bullied.
The code of ethics was instilled into the children by having them watch kung-fu films such as Fearless, Ip Man 2, and Kung Fu Hustle. Through guided discussion and role playing social scenarios stimulating interpersonal conflicts, the children modelled how the characters used martial ethics to deal with conflicts.
Wu de proverbs, such as “不懂打人學打人  學識打人不打人” (Lay guys learn kung-fu to get into fights; But martial artists keep off from fights.), were introduced as part of the curriculum, explained Mr Lee, and the children found them intriguing and enjoyed reciting them.
The research project received a $390,400 grant from the Research Grants Council under the General Research Fund. The project will be extended into next summer to collect more data.
The study also looks into distinct features of Chinese martial skills and ethics. “The findings shed light on the implications of using Chinese martial arts as an aggression-reducing intervention,” said Dr Fung, a leading expert on research on schoolchildren aggressive behaviour and its intervention.
“It’s clear that we can prevent children with aggressive attributes from growing into aggressive grown-ups who could commit violent crimes,” said Dr Fung. “We hope a teaching methodology based on Chinese martial arts can be derived from this research and adopted by local schools in the near future.”