​Aerial micro-robots can stay aloft longer thanks to an energy-saving device created by a team of Harvard roboticists and an engineer at City University of Hong Kong (CityU).

The technology can be used to provide a birds-eye view of a disaster area or detecting hazardous chemical agents. 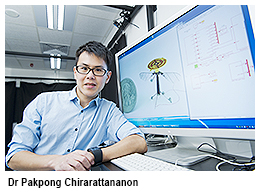 The research project titled “Perching and Takeoff of a Robotic Insect on Natural and Artificial Overhangs Using Switchable Electrostatic Adhesion” was published in the prestigious journal Science in May.

It is crucial for many applications that aerial robots maintain a high vantage point for extended periods of time. However, currently available on-board power systems as well as mechanical fatigue combine to constrain flight time, especially for smaller, battery-powered robots.

The solution is a biologically inspired approach. The team discovered that they can “perch” the micro-robot on natural or artificial structures during flight to save energy. To do so, they embed a switchable electrostatic adhesive, which is less than 200 nanometres thick, on top of the micro-robot. This adhesive can be used to “perch” the robot.

“The micro-robots can stick to, and takeoff from, almost any surface, from glass to wood to a leaf, using static electricity, which is the same force that causes a static-charged balloon to stick to a wall. To detach, the power supply is simply switched off,” said Dr Pakpong Chirarattananon, co-author of the paper and Assistant Professor in CityU’s Department of Mechanical and Biomedical Engineering.

Perching required roughly 1,000 times less power than sustained flight, he explained. In addition, hanging underneath structures provides a clear path to the ground for vision or signal transmission, as well as protection from extreme weather conditions. 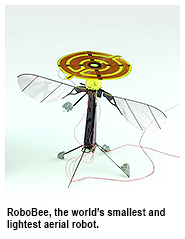 The entire mechanism weighs 13.4mg, and the total weight of the micro-robot is around 100mg.

Dr Chirarattananon started working on the dynamics and control of insect-scale flapping-wing robots when he was a PhD student at Harvard University. In 2014, he and his team created the world’s smallest and lightest insect-like aerial robots, which are called RoboBees.

“Micro-robots may exceed the agility of larger systems at lower costs. They can be deployed in large volume to work together in a coordinated fashion. A swarm of insect-sized flying robots equipped with sensors could collect detailed information about air pollution, for instance,” he said.

Other uses include monitoring disaster areas, detecting hazardous chemicals, securing signal transmission in ad-hoc communication networks and assisting with the pollination of crops, among others.

The research team, led by Professor Robert Wood at Harvard University, is now working on the control unit, the power source, and other aspects of the robots, which rely on an external array of cameras and computers to fly, with the aim of making the robotic insects fully autonomous and wireless. Dr Chirarattananon is now carrying out research in the area of micro aerial vehicles and bio-inspired robots at CityU.