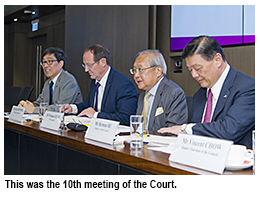 A farewell, ranking success and the unity of the campus community at City University of Hong Kong (CityU) featured at the 10th meeting of the CityU Court, which was held on 14 June 2016.
Although he will step down as Pro-Chancellor at the end of June, Dr Norman Leung Nai-pang said CityU would always be close to his heart.
“It has been an honour and a privilege to serve CityU for over 30 years,” he said, before welcoming new Court and Council members to CityU and offering an overview of recent achievements.
Dr Leung expressed his delight that CityU was now ranked 7th in Asia in the latest Quacquarelli Symonds (QS) Rankings, and congratulated the University on the news, which was announced at the Court lunch.
CityU’s ranking success was powered to a substantial degree by the support it attracted from the community, said Professor Way Kuo, University President, in his address to the Court.
Professor Kuo also stressed the unity of the campus community in coming together to overcome the challenges of the past few weeks following the Sports Hall Incident on 20 May.
“We have a great team at CityU, and the support of the Court and the CityU community in general has been very strong,” he said.
This point was echoed by Mr Herman Hu Shao-ming, Chairman of CityU Council.
“It has been very encouraging to witness the professionalism, dedication and team spirit of our colleagues in handling the situation and in conducting follow-up actions,” he said.
In his address to the Court, Mr Hu touched upon some recent successes among CityU researchers, citing work in managing food waste, energy efficiency, smart city technologies and entrepreneurship, among others.
The President discussed the new QS Rankings, emphasising the strength of CityU in sustaining its position among the top-ranked higher education institutions in the region. 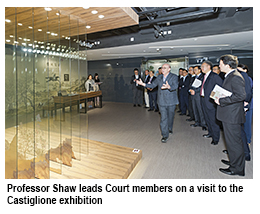 Before the meeting, Court members were treated to a tour of the “Giuseppe Castiglione – Lang Shining New Media Art Exhibition” and a sharing session with Professor Jeffrey Shaw, Chair Professor of School of Creative Media, about the collaboration between CityU and the National Palace Museum of Taiwan on Castiglione’s art exhibition.
Another highlight was a short video about CityU that focused on our strengths, our diversity and our unity.

The meeting ended with a few words from Dr Leung.

“I believe the tremendous progress this young university has made within just a
decade would not have been made possible without the support of all past and current members of the Court and Council, colleagues, students, alumni and friends,” he said.
It was also announced that from now on there would be two Court meetings each year, and that the next meeting would be held in December 2016.