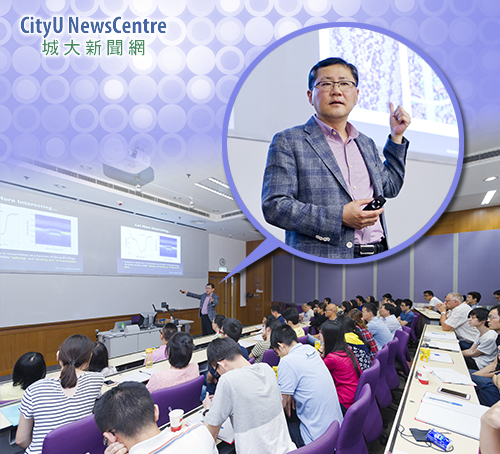 The study on new nanoscale structures and tools has enabled the development of spanning quantum optics, plasmonics, immunology and neurobiology, according to Professor Park Hong-kun at a distinguished lecture for the Institute for Advanced Study at City University of Hong Kong (CityU) on 1 June.
Professor Park is a professor of chemistry and physics at Harvard University and an institute member of the Broad Institute at MIT and Harvard. His research interest lies in developing nanometre-sized structures and applying them to possible technological applications.
Nanoscale structures, including diamond nanocrystals, silicon needles and silver grooves, addressed various problems in physical and life sciences, said Professor Park during his lecture titled “Nanoscale Gems, Needles and Grooves”.
His laboratory, Hongkun Park Research Lab, at Harvard University is building the CMOS-Nanoelectrode Array (CNEA), which enables high-density intracellular recording. It helps in the development of network-based pharmaceutical screening.
Professor Park obtained his PhD from Stanford University and did his postdoctoral training at the University of California, US. He has published over 85 peer-reviewed research articles and won many innovation awards, including a World Technology Network Fellowship in 2004 and the NIH Director’s Pioneer Award in 2008. He was elected as a Fellow of the American Association for the Advancement of Science in 2011.