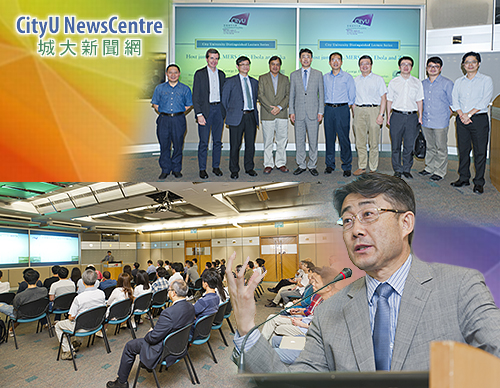 Understanding the functional and structural mechanisms of interspecies transmission (host jump) can lead to the more effective control and prevention of viral infectious diseases such as influenza, MERS-CoV, Ebola and Zika, according to a renowned microbiologist at a CityU Distinguished Lecture Series at City University of Hong Kong (CityU) on 26 May.
Most infectious viruses are zoonotic pathogens that have crossed the species barrier to infect humans. This process, known as “host jump”, has caused serious public health concerns worldwide, said Professor George Fu Gao, Director of the Key Laboratory of Pathogenic Microbiology and Immunology at the Chinese Academy of Science (CAS) during his talk titled “Host jump: Flu, MERS-CoV, Ebola and Zika”.
Professor Gao said the world should work together to achieve “One Health” to attain optimal health for people, animals and the environment. He was pleased to learn that CityU had established Hong Kong’s first School of Veterinary Medicine and that he hoped such interdisciplinary efforts would tackle viral infectious diseases.
Professor Gao is an elected Member of CAS; Fellow of the World Academy of Sciences; and Fellow of the American Academy of Microbiology. He is also Vice-President of the Beijing Institutes of Life Science at CAS; and Deputy Director-General of the Chinese Center for Disease Control and Prevention.