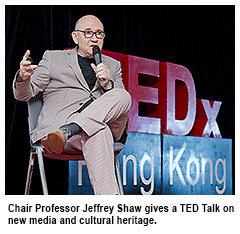 How new media gives new expression to cultural heritage and historical paintings was the topic of a TED Talk on 13 May delivered by Chair Professor Jeffrey Shaw, School of Creative Media at City University of Hong Kong (CityU).

The talk, presented by the Affordable Art Fair and TEDxHongKong, featured stellar international and local artists who shared what they were most passionate about and the highlights of their influential works.

Professor Shaw, a leading figure in new media art, showcased some of his recent cultural heritage projects such as the Mogao Grottoes at Dunhuang and Hampi in India.

Using laser-scanning, 3D panoramic photography, gigapixel photography and 360-degree cinematography, cultural heritage could be re-presented in virtual and augmented reality, he said, giving audiences an immersive experience regardless of the time, space, and venue. 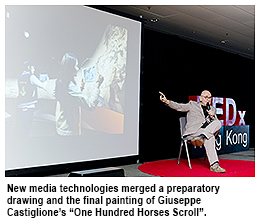 These new media technologies featured in the Castiglione exhibition, Professor Shaw said. Using the “Discover the painting in Castiglione’s Drawing” as an example, he showed that in the background is a preparatory drawing made by Castiglione, which is now in a collection at the Metropolitan Museum in New York. By moving an iPad across the sketch, one can compare with the final painting, which is stored in the National Palace Museum in Taipei.

“Augmented reality installations allow you to bring the two elements together,” Professor Shaw added. “We are mixing the old and the new to make a new experience.” 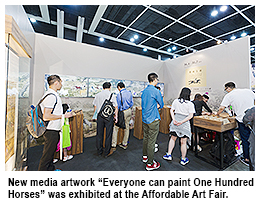 Other new media art pieces include a device that allows visitors to flip a Chinese chess board with flowers of the four seasons painted on the back by Castiglione. Also, visitors can become Castiglione by bringing a horse from the painting “One Hundred Horses” onto their touch screen, use the digital paint-brush to colour it and then send it back to the painting.

This latter was exhibited in a booth in the Affordable Art Fair at the Hong Kong Convention and Exhibition Centre from 13 to 15 May.