Four research projects led by City University of Hong Kong (CityU) have secured the largest amount of research grants in dollar terms and the biggest number of awards so far for the University through a government-level scheme for boosting collaborative research.

The projects have received $25 million from the Collaborative Research Fund (CRF) Scheme under the Research Grants Council (RGC).
The funding will be used to advance research into crucial tumour features, multidimensional big data analysis, threats to coral ecosystems and memory formation.
CityU is ranked second among local universities both in terms of the CRF grant amount and number of awards received for the 2015-16 round of exercise. CRF encourages research groups to engage in collaborative research across disciplines and/or across institutions.
3D analysis of cancer cells 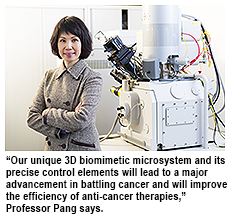 Professor Stella Pang, Chair Professor of Electronic Engineering, is leading an inter-disciplinary team of outstanding engineers and biomedical scientists from various local and international universities in a project titled “Biomimetic 3D Microsystem to Study Tumour Survival and Drug Responses” that was awarded around $8 million.
The team believes that the current models for studying tumours are inadequate, pointing out that drugs that work in laboratories, and are approved for clinical trials, don’t necessarily work on humans.
The unique 3D biomimetic platform that Professor Pang’s team will work on will reproduce the crucial features of human nasopharyngeal carcinoma, including the cell type composition and distribution, extracellular matrix, vascularisation and nutrient release.
“Our unique 3D biomimetic microsystem and its precise control elements will lead to a major advancement in battling cancer and will improve the efficiency of anti-cancer therapies,” Professor Pang said.
Data produced in this project could be extended to lung and breast cancers, for instance, and could potentially revolutionise our fundamental understanding of cancer cell dynamics in a tumour environment, she added.
Towards a new computing model: “tensor computing”

The research project “Efficient Algorithms and Hardware Accelerators for Tensor Decomposition and their Applications to Multidimensional Data Analysis” led by Professor Yan Hong, Chair Professor of Computer Engineering and Dean of the College of Science and Engineering, has received over $6 million from the CRF.
Multidimensional data are an important part of “big data”, a buzzword for the unprecedented development of internet and communications systems, and computing and mobile devices. While big data promises great potential, the fundamental mathematics and computing concepts are being actively developed and hotly debated.
This three-year project sets out to develop a new computing model called “tensor computing” and build corresponding hardware accelerators. It will use biomedical data to look into the causes of drug resistance among lung cancer patients, and aim to personalise treatment.
Professor Yan, who has a long-term interest in biomedical informatics, and his team are looking at lung cancer because of the high incidence and mortality rates of the disease in Hong Kong and overseas.
The data will be used to build a model for cancer mutations, 3D molecular structures of the protein mutants, drug binding patterns, the duration of the drug effectiveness, and how some patients resist the drug.
“Personalised treatment based on molecular modeling will greatly benefit cancer patients,” he said.
Threatened coral ecosystems in Hong Kong waters 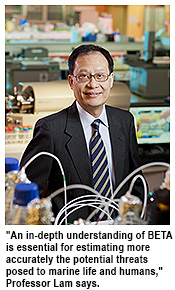 Professor Paul Lam Kwan-sing, Chair Professor of Biology and Director of the State Key Laboratory in Marine Pollution, and his team will use a $5.5 million grant from the CRF to study the effect of benthic and epiphytic toxic algae (BETA) on marine ecosystems and also investigate the primary factors that regulate the distribution, growth and toxicity of BETA in Hong Kong waters and along the coast of southern China and Taiwan.
Toxic microalgae are an emerging threat to marine ecosystems in waters around Hong Kong and further afield. The science community is increasingly drawn to benthic microalgae (which live on, in, or near the seabed) because some produce toxins.
One such toxin called ciguatoxin, which has been detected in coral reef fish imported from the Pacific Ocean, Indian Ocean and Caribbean Sea, can cause a food-borne illness called ciguatera fish poisoning.
“We are studying what we call the BETA-affected coral ecosystems,” Professor Lam explained. Such BETA areas have been identified off the coast of Japan, the Korean peninsula, Malaysia, Taiwan and Thailand as well as Hainan and Hong Kong.
“The distribution and severity of BETA may be one of the most sensitive indicators of environmental disturbance in tropical coral reef ecosystems. An in-depth understanding of BETA is essential for estimating more accurately the potential threats posed to marine life and humans,” he said.
Finding the “memory ink” 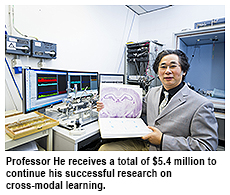 A research proposal led by Professor He Jufang in the Department of Biomedical Sciences has received a total of $5.4 million for a three-year project titled “Neuronal Mechanism of Cholecystokinin-facilitated Cross-modal Learning and Memory”, which is an extension of his research on cross-modal learning.
In his previous research, he and his team successfully identified a neuromodulator, i.e., cholecystokinin (CCK), which enables the efficient writing of memory in the neocortex. The team’s findings may help to develop drugs that can alleviate or even reverse memory loss caused by ageing or forms of dementia such as Alzheimer’s disease.
In the new research, the team will extend its investigation into the role that CCK plays in memory encoding by inscribing a memory into an unconscious rat’s brain and observe if the memory has been inscribed through a specifically designed behavioral experiment.