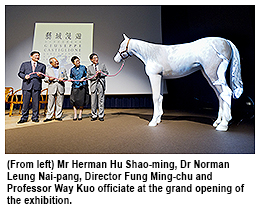 City University of Hong Kong (CityU) and the National Palace Museum (NPM) in Taipei have teamed up once more, this time to organise the “Giuseppe Castiglione – Lang Shining New Media Art Exhibition”. The exhibition merges technology into creativity and art itself by digital means, highlighting the value of the Italian Jesuit Giuseppe Castiglione’s (1688–1766) artworks and their historical context, and by pioneering a fresh way of presenting historical paintings.
Combining innovative ideas and digital technology from CityU’s School of Creative Media (SCM), the exhibition enables a virtual and physical presentation of Castiglione’s artworks. Viewers can also travel back in time to appreciate Castiglione’s aesthetic style.
The exhibition signals CityU’s leadership in the field of creative media, and marks a milestone in terms of cultural and art exchanges between Hong Kong and Taiwan.
Officiating at the grand opening of the exhibition on 25 April were Dr Norman Leung Nai-pang, Pro-Chancellor of CityU, Mr Herman Hu Shao-ming, Chairman of CityU Council, Professor Way Kuo, University President, and Ms Fung Ming-chu, Director of the NPM. Around 300 guests attended the ceremony.
In his welcoming remarks, Professor Kuo said these unique artworks from NPM were vividly re-presented through SCM’s innovative 3D digital technology. He added that the collaboration between CityU and NPM was a “perfect match” between technology and humanity art.
Professor Kuo said “Giuseppe Castiglione – Lang Shining New Media Art Exhibition” has already been held in Taipei and Italy respectively in which CityU had the honour to take part on both occasions. The exhibition moves to CityU this year. He pointed out that the exhibition pioneered a new high-profile collaboration between the University and NPM. 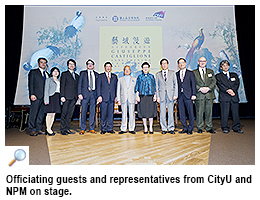 Director Fung extended her special thanks to Professor Kuo and his team for their passionate participation in the production of new media art for the National Palace Museum, and for twice receiving new media art exhibitions from the NPM at CityU.
She agreed with Professor Kuo’s interpretation of “soulware” as a relationship with the hardware and software within higher education.
“Hardware refers to the electronic facilities and machines used in installation, and software the creative design and technological support of the curatorial team,” she said, using the “Giuseppe Castiglione: Lang Shining New Media Art Exhibition” as an example.
“The soulware here manifests itself in the extant works by Giuseppe Castiglione, and more importantly the dedication to education and hard work found among all people involved in the exhibition,” she added.
Mr Hu thanked Director Fung and her team from Taiwan as well as Chair Professor Jeffrey Shaw and CityU's SCM for organising this wonderful exhibition. He said, “I hope that it is going to inspire more people and more ideas about a new age of presenting art to us in Hong Kong, Taiwan, Asia and the world.”
The event follows on from last year’s critically acclaimed “Rebuilding the Tong-an Ships New Media Art Exhibition”. An eminent court painter, architect and art designer, Castiglione was highly recognised for his excellent artworks at the imperial court of the Kangxi, Yongzheng and Qianlong Emperors. The exhibition’s innovative design combines historical artworks, new media, digital technology and contemporary interactive art to present the masterpieces of Castiglione, who had such a profound impact on Chinese painting. 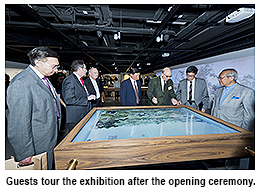 There are 28 duplicate copies of selected works by the artist, plus 13 new media pieces, nine of which have been specially produced by Professor Shaw and his team in SCM. These nine pieces are “Interactive Folding Fan”, “Discover the Painting in Castiglione’s Drawing”, “Reflections of the Peacock ”, “Interactive ‘One Hundred Horses’ Scroll”, “Another Kind of Chess Game”, “Copperplate Engravings with Sound Effects”, “Everyone can paint ‘One Hundred Horses’ ”, “Spectral Flowers”, and “Explore Castiglione’s Painted Flora and Fauna”. The last item was on display in Taiwan and in Italy, respectively.
The “Giuseppe Castiglione – Lang Shining New Media Art Exhibition” that was jointly organised by the NPM and CityU in Taipei last October has recently been awarded the Best of Show and Best New Media in WorldFest-Houston 2016. The 4K animation Adventure of the Mythical Creatures at the National Palace Museum and the 4K documentary Victory in Etching were awarded Silver Remi and Bronze Remi, respectively. These two videos will be screened at the exhibition currently held at  CityU.
Exhibition details:
Date: 26 April to 31 July 2016
Time: 10am to 7pm daily. Closed on Mondays.
Venue: 18/F, Academic 3, CityU, Tat Chee Avenue, Kowloon
Admission: Free of charge
Website: http://www.cityu.edu.hk/langshining/