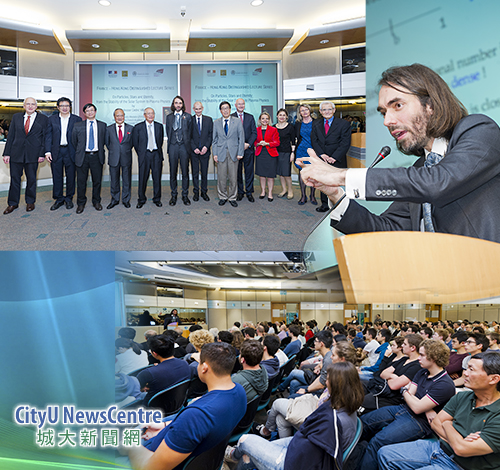 The solar system is poorly predictable and the stability problem can only be solved probabilistically, according to Fields Medalist Professor Cédric Villani at City University of Hong Kong (CityU) on 13 April.

The entire chapters of the history of sciences have emerged from understating the solar system, said Professor Villani of the Université Claude Bernard-Lyon I at the latest installment of the France-Hong Kong Distinguished Lecture Series.

The lecture was titled “On Particles, Stars and Eternity: from the Stability of the Solar System to Plasma Physics”.

Professor Villani said the fate of the solar system might be related to the famous and mysterious Landau damping in plasma physics, and he discussed the mathematical core of the nonlinear Landau damping and stability of plasmas, as well as recent developments in fluid mechanics in the lecture.

He argued that the proof of the nonlinear Landau damping established a close link of the damping property with two most famous paradoxical phenomena in classical mechanics: Kolmogorov’s Theorem (1954) and Malmberg’s Experiment (1967).

Professor Cédric Villani is the Fields Medal winner in 2010. He is also the Director of the Institut Poincaré and a member of the French Academy of Sciences.