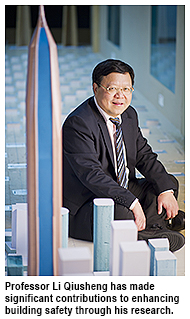 Professor Li Qiusheng from the Department of Architecture and Civil Engineering at City University of Hong Kong (CityU) has been awarded the 2016 Jack E. Cermak Medal by the American Society of Civil Engineers.
Professor Li is the first Chinese scholar in the world to receive this honour, which is the highest in the field of wind engineering and industrial aerodynamics. The award presentation ceremony will be held in the US in May.
Professor Li’s research interests and technical expertise are in wind engineering, structural dynamics and computational mechanics. By combining and applying field measurement, wind tunnel testing, numerical simulation and theoretical analysis, his research team has made significant contributions to enhancing building safety through the systematic study of boundary layer wind characteristics and wind effects on structures. Examples are as follows:
“Tropical cyclone is one of the most serious natural disasters in the world, often causing casualties and economic damage in coastal areas of southeast China. Our research results are significant in the sense of helping to safeguard the lives and assets of many people,” Professor Li said.
Since joining CityU in 1996, Professor Li has received numerous awards and honours, including the National Natural Science Foundation of Chinese Outstanding Overseas Scientist Award in 2004, Cheung Kong Chair Professorship by the Ministry of Education in 2007, and the 2010 First Class Award of Scientific and Technological Progress from the Ministry of Education.
Aiming to recognise excellence in the field of wind engineering and industrial aerodynamics, the Jack E. Cermak Medal is presented once a year to a recipient selected from around the world. The prestigious award is ordinarily granted for cumulative distinguished contributions in wind engineering. The selection panel commented that Professor Li had “made many contributions to wind engineering that range from fundamental to applied research as well as structural dynamics studies on major building developments in Asia and the Pacific region.”
Since its launch in 2000, the Jack E. Cermak Medal has been presented to a total of 12 wind engineering luminaries, who are mostly academicians of science or engineering in Australia, Canada, UK and US. Six of them have been or is currently chairman of the International Association for Wind Engineering.
“I’m very honoured to receive the prestigious award and I’m grateful to CityU for its support over the years. The award also shows international recognition for CityU’s academic achievements,” Professor Li said.
Over the years, Professor Li has authored three books and published more than 250 papers in international journals. He currently serves as the associate editor of the Journal of Structural Engineering of the American Society of Civil Engineers and an editorial board member for 12 international scientific journals.