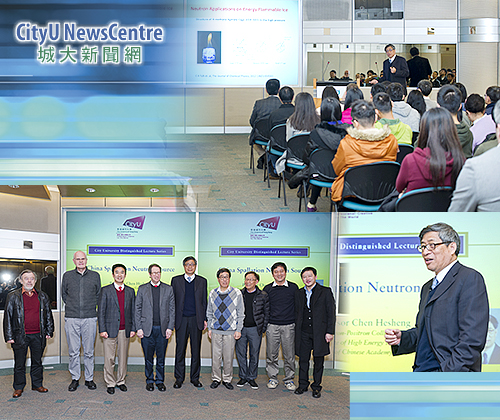 Neutron scattering applications should be promoted in Hong Kong because the China Spallation Neutron Source (CSNS) will open in Dongguan in 2018, according to a renowned physics scholar at a lecture at City University of Hong Kong (CityU) on 2 February.
Neutron scattering is a powerful research tool with applications in material sciences and engineering, physics, chemistry, life sciences, energy and the environment, among others, said Professor Chen Hesheng, Director of the Beijing Electron-Positron Collider National Laboratory in the latest installment of the CityU Distinguished Lecture Series.
His talk was titled “China Spallation Neutron Source”.
CSNS is the Dongguan branch of the Institute of High Energy Physics (IHEP), which is China’s largest comprehensive research centre on particle physics. The facility will be opened in the spring of 2018. A general purpose powder diffractometer, a small angle neutron scattering instrument and a magnetic reflectometer are planned for operation.
Professor Chen said Hong Kong was well-positioned to take advantage of CSNS, and more universities should hire faculty members in neutron scattering and train young experts though summer schools and workshops.
CityU took the lead by introducing this powerful tool to the local scientific community at a summer course in 2014.
Professor Chen received his PhD in Physics from the Massachusetts Institute of Technology. He was the Director General of IHEP of the Chinese Academy of Sciences, Beijing from 1998 to 2011. He has been a member of the Chinese Academy of Sciences since 2005.