​A donation worth HK$3.6 million from China Resources (Holdings) Co. Ltd (CR) has been used to set up a scholarship to support ethnic minority students from mainland China who wish to study at City University of Hong Kong (CityU).

A ceremony was held at CityU on 1 February to celebrate the creation of the China Resources Ethnic Minorities Scholarship. 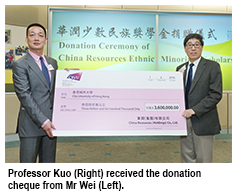 CityU had been striving to foster international collaboration and strengthen linkages with the mainland. Professor Kuo expressed his gratitude to CR for its generous donation. The establishment of the China Resources Ethnic Minorities Scholarship would encourage outstanding students from ethnic minorities to come to study at CityU so as to facilitate achieving the core themes of our Strategic Plan.

Mr Wei thanked CityU for implementing the scholarship and promoting it in Guangxi, Guizhou, Ningxia and Yunnan. He said he was delighted that the scholarship recipients had integrated successfully into life at Hong Kong. 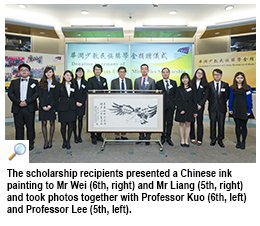 The recipients were also sponsored by CR to take part in voluntary services at Jinzhai CR Hope Town in Anhui where they could help people in need, contribute to society and be exposed to different life experiences.

At the donation ceremony, the recipients shared their thoughts about their voluntary work and presented the CR representatives with a Chinese ink painting that they created themselves. Titled “The Eagle Spreads its Wings”, the painting represents the prospects of students who will persevere in doing their best for the well-being of the world.