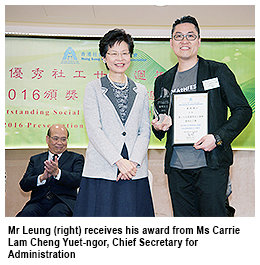 Mr Leung graduated from CityU’s Bachelor of Arts (Honours) in Social Work programme in 2004. In 2007, he joined the End-of-Life Caring Services Unit at S.K.H. Holy Carpenter Church District Elderly Community Centre and started to provide education on life and death as well as bereavement counselling services. He is currently a senior services manager at the Centre.

To Mr Leung, his mission as a social worker is to enable terminally ill patients “pass away in peace”. He offers condolences and warmth to grieving families and tries to make people less afraid of death.

“About forty thousand people pass away in Hong Kong every year. That is, more than 100 deaths on average each day. The number continues to rise as people live longer and so more people face chronic diseases. Many terminally ill patients do not die as they would wish,” Mr Leung said. 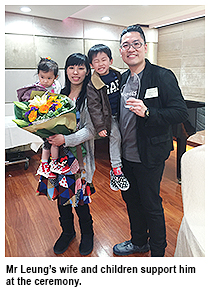 Therefore, in addition to providing bereavement counselling and training for voluntary workers, Mr Leung also actively promotes education about life and death. Through talks, training workshops and exhibitions, he hopes that more people can face death with a positive attitude.

Since 2013, he has worked closely with different media to promote the idea of “preparing for death in advance but actively enjoying life at present”.

Last June he organised DEAtHFEST, a unique three-day exploration of issues related to death. Nearly 10,000 people, including teenagers and young professionals, attended the more than 30 talks and 70 art workshops in which attendees could express their views on death in an artistic way.

Mr Leung said he had accepted the nomination because he wanted to arouse public awareness about bereavement services and education on life and death, not because he wanted to boost his career. Also, he said the award could encourage more people to support the development of similar services.

His concern for other people was inspired by CityU’s education, he said. “CityU taught me the proper manner of a social worker, how to care for other people and society, and how to analyse problems. I learned how to help others according to different situations,” he said.

His goal is to continue to do work related to life and death, including setting up an integrated centre that provides hospice care, bereavement counselling and education about life and death in order to offer frontline services for people with different needs.

Also, he hopes to set up a research centre for education on life and death to empower younger generations to learn about life and death from an early young age, cherish their precious lives, and remove the taboo about death in society.