New research conducted by City University of Hong Kong (CityU) reveals that while more than 20% of local secondary school students report depression symptoms and 15% have anxiety symptoms, positive education is seen to have a mitigating effect on one’s mental health. 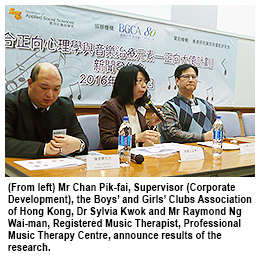 More than 1,700 Form 2 and Form 3 students were surveyed between September 2014 and December 2015 for the project, which was conducted by the Department of Applied Social Sciences at CityU in conjunction with the Boys’ and Girls’ Clubs Association of Hong Kong. Questionnaires were used to examine respondents’ levels of anxiety and depression as well as their subjective happiness. The project, titled “Integrating Positive Psychology and Music Therapy Elements – Positive Ambassador Project”, also studied risk and protective factors that may affect the students’ emotion and subjective happiness.
Dr Sylvia Kwok Lai Yuk-ching, Principal Investigator of the Project and Associate Professor in CityU’s Department of Applied Social Sciences, said among the 1,710 secondary school students interviewed, 47.0% and 21.1% were possible cases and probable cases of depression, respectively. In addition, 40.6% of possible cases of anxiety and 15.5% probable cases were identified. While male students had lower levels of anxiety than female students, their levels of depression were higher.
Compared to research from other countries, the CityU team noted, Hong Kong has a similar percentage of anxiety cases (CityU research: 15.5%; UK research: 14%). However, the ratio of cases of depression among local students was much higher (CityU research: 21.1%; UK research: 2%). Also, out of a full score of 7 for measuring subjective happiness, local students gave a score of 4.53, slightly lower than students of a similar age elsewhere (students aged 12 in Finland: 5.29).
CityU’s findings also revealed that abuse and trauma in childhood had a significant positive correlation with depression and anxiety in adolescence, while a sense of hope, one’s emotional quotient and ability to solve social problems had a negative correlation. For subjective happiness, while peer support, an ability to solve social problems, a sense of hope and emotional quotient had a positive correlation, abuse and trauma in childhood had a significant negative correlation.

With funding from the Research Grants Council’s General Research Fund, the research team invited 115 teenagers from six secondary schools to participate in 10 sessions of activities in what they called the “Positive Ambassador Groups”. Fifty-five of the students from three schools joined the activities of “Positive Psychology Group” and 60 students from the other three schools took part in the activities in the “Integrating Positive Psychology and Music Therapy Elements Group”.
The “Positive Psychology Group” helped participants understand and express their emotions, enhance their sense of hope and improve their problem-solving skills through activities such as games, experiential exercises, story sharing, video watching, and small-group sharing. Meanwhile, the “Integrating Positive Psychology and Music Therapy Elements Group” boosted participants’ sense of hope, emotional quotient and problem-solving skills by introducing positive themes through music activities.
After participating in the activities, the participants in the “Positive Ambassador Group” reported a higher sense of hope than students who had not joined the group. Also, they could better manage and apply their emotions, with a much higher score for happiness and lower levels of depression and anxiety.
Dr Kwok said positive psychology builds and enhances internal psychological factors such as personal strengths, resources and abilities. In addition, music therapy involving listening, singing, playing instruments and rhythmic movements can help teenagers express their feelings, utilise creativity and learn problem-solving through cooperation.
“Through integrating elements of positive psychology and music therapy, we have developed a set of innovative group activities. The purpose is to uncover and develop students’ positive psychological characteristics, help them deal with pressure and challenges, mitigate their anxiety and depression, and foster a more positive and optimistic attitude,” Dr Kwok said.
To enable social workers, teachers and counsellors to find out more about positive psychology and music therapy, the CityU researchers have produced a CD-ROM that contains details about the activities that the students participated in.
Dr Kwok added that parents, schools, social welfare organisations and the government could all play a part in mitigating anxiety and depression and enhancing subjective happiness among secondary school students. For example: