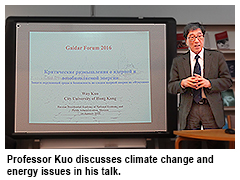 Professor Way Kuo, President of City University of Hong Kong (CityU), attended the Gaidar Forum 2016, an annual event organised by the Russian Presidential Academy of National Economy and Public Administration (RANEPA), from 13 to 15 January.
During the event, Professor Kuo discussed cooperation opportunities, including student and faculty exchange and joint PhD programmes, with Professor Vladimir Alexandrovich Mau, Rector of RANEPA, and Professor Sergey Zuev, Dean of the School of Public Policy at RANEPA.
They were among many high-level delegates at the event, which was also attended by Russian Prime Minister Dmitry Medvedev, who gave the welcoming remarks. 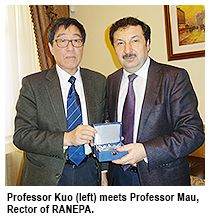 In addition, Professor Kuo gave a talk on climate change and energy issues, touching on topics related to coal and nuclear power as well as issues related to safety and security.
There was also a launch ceremony on 14 January for one of Professor Kuo’s books Critical Reflections on Nuclear and Renewable Energy: Environmental Protection and Safety in the Wake of the Fukushima Nuclear Accident that has been translated into Russian and published by Delo Publishers of RANEPA.