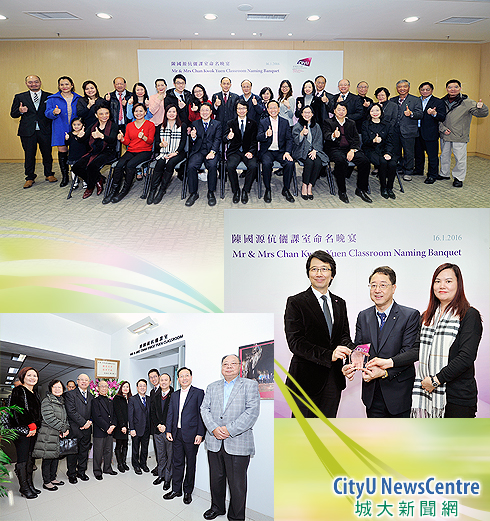 Classroom B5-309 in Academic 1 at City University of Hong Kong (CityU) has been named “Mr & Mrs Chan Kwok Yuen Classroom” in appreciation of the support and generous donations made to the University by Mr and Mrs Chan Kwok-yuen.
A naming dinner held on 16 January was attended by Mr and Mrs Chan, their family members and friends, Professor Matthew Lee Kwok-on, Vice-President (Development and External Relations), and Ms Kathy Chan Yin-ling, Associate Vice-President (Development and Alumni Relations).
A photo session was arranged at the Mr & Mrs Chan Kwok Yuen Classroom followed by a dinner hosted by Professor Lee. All attending guests enjoyed a heartwarming and joyful evening.
Professor Lee expressed his gratitude to Mr and Mrs Chan for their donations. He particularly thanked Mr Winfred Chan Hon-pun, Member of the Board of Governors of CityU Foundation, for his assistance in making this donation successful.
Professor Lee added that social and business leaders gave CityU the momentum to pursue excellence and scale new heights.
Enthusiastic in charity work and industrial initiatives, Mr Chan Kwok-yuen is an entrepreneur who started his own business. A former Governor of the Rotary Club of Shatin, he serves as Deputy Assistant Governor of Rotary District 3450 and as Vice-President of the New Territories General Chamber of Commerce.
Mr Chan’s donation will be used to set up a bursary for students in need. To encourage students to adopt a positive attitude towards life, Mr and Mrs Chan have left the motto “Practice forgiveness. Be optimistic. Don’t give up.” in the classroom.