The 9th meeting of the Court of City University of Hong Kong was held on 3 December.Dr Norman Leung Nai-pang, in his capacity as Pro-Chancellor, began the meeting by welcoming new members of the Court and thanking Mr Herman Hu Shao-ming, Council Chairman, and Professor Way Kuo, University President, for their leadership.
“They are both united in raising CityU’s brand image locally, in the region and on a global scale, and over the past twelve months, they have guided the University to some very notable successes,” Dr Leung said.
After an overview of some of the key highlights in 2015, such as ranking, research successes, community support, knowledge transfer, and the overall efforts of students/alumni/faculty, Dr Leung thanked those members of the Court whose terms of office would expire at the end of the year. 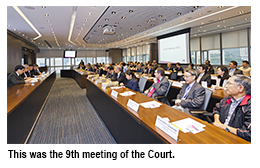 Mr Hu began by reporting how glad he was that 2015 had been another busy yet rewarding year for the Council.
“The Council in the past year has remained committed to maintaining a robust governing framework to enable the growth and further development of the University,” Mr Hu said.
His talk touched upon the new five-year Strategic Plan, staff-related policies, campus development, an update on the strategic alliance between the Community College of City University and the University of Wollongong, Australia, the cultivation of community relations, as well as the work of the Council. 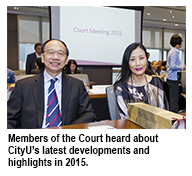 He also discussed some major accomplishments from 2015 including promoting the CityU brand, and excellence in research such as the Research Assessment Exercise (RAE) 2014 and CityU’s achievements in the government’s Early Career Scheme.
In his report, Professor Kuo stressed the need for CityU and its supporters to help to promote the new image of CityU, i.e., that the University was no longer a “technical” college but instead one of the world’s top 60 universities. 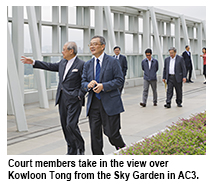 He also emphasised the importance of the School of Veterinary Medicine and how it was attracting a great deal of support from the community, and pointed out that CityU was leading the way locally in getting more and more students signed up for overseas exchanges during their studies.
The President also highlighted the inauguration of the new Institute for Advanced Study at CityU, pointing out that among its founding members were Nobel laureates and other esteemed academics; and he acknowledged the efforts of the CityU Foundation and the Council Chairman for all their work to support the University’s development initiatives.