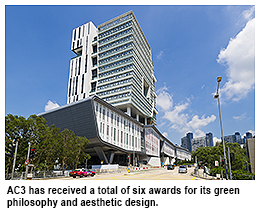 City University of Hong Kong (CityU) has been named the institutional winner in Hong Kong’s FuturArc Green Leadership Award 2015, recognising its leadership in promoting sustainable architecture. This brings the total number of architecture awards received for Academic 3 (AC3) to six.

Opened in May 2013, the flagship building on CityU’s campus is not only the largest capital project in the University’s history but also a building for the 21st century with its sustainability features that support environmental protection.

The FuturArc Green Leadership Award honours teams behind projects that push the limits and definition of a green building in Asia. Unlike most architecture awards, the Institutional Winner of the FuturArc Green Leadership Award is presented to the institution along with the consultants and the contractors associated with the project, as innovations in sustainable building are made possible only with the full support of the institution.

FuturArc is a bimonthly journal that promotes sustainable architecture in Asia-Pacific. 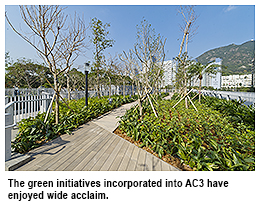 The green initiatives incorporated into AC3 have enjoyed wide acclaim. As early as 2012, it received a merit award in the New Building-Hong Kong (Building Under Construction) category of the Green Building Award.

The philosophy of sustainable development was evident across the entire building project: from the design concept, roof garden and cross ventilation system to the use of environmental-friendly materials and energy-efficient building features as well as the application of renewable and recycling technologies.

Windows exposed directly to sunlight, for example, are made of low-emissivity glass to reduce building temperatures and energy consumed for air-conditioning.

This landmark building has also been acclaimed for its aesthetic features and received an Honor Award for Architecture in the American Institute of Architects HK Chapter’s Annual Award 2013.

In addition to these distinctions, AC3 received the Gold Standard (New Building) by the Building Environmental Assessment Method (BEAM) Society in 2013; Good Class (Whole Building) award of the Indoor Air Quality Certificate 2014; and the Certificate of Excellence (Best Institutional / Public Space) under the Perspective Award 2013.

AC3 comprises a 20-storey upper block and a 5-storey lower block that resemble a ship floating in the air, signifying smooth sailing for CityU and its members.