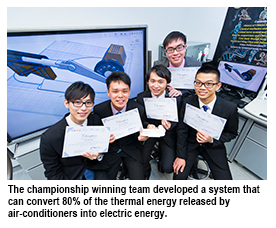 Engineering students from City University of Hong Kong (CityU) won the championship and the 2nd runner-up title in the HKIE Joint Institutes Competition.

The competition was organised by the Student Chapters of the Hong Kong Institution of Engineers (HKIE). The theme was “Green Life in Hong Kong”.

The championship winning students developed a system that can convert 80% of the thermal energy released by air-conditioners into electric energy. The runner-up team devised a device that can turn noise into electric power.

They focused their project on air conditioners because such devices consume large amounts of power, roughly half the total power consumed by all electrical appliances.

Since most central air-conditioning systems use water towers for cooling, a large quantity of thermal energy and water is wasted. In addition, water towers may become a source of health threats such as Legionnaires’ disease.

The team applied the principle of convective heat transfer to develop motors that can turn the thermal heat released by air-conditioning systems into electric power: the wider the temperature difference, the better the operation of the team’s device.

As much as 80% of thermal energy can be turned into usable electric power, which can be used directly for other electrical systems such as the lighting system for corridors in a building. The power can also be saved to battery for future use.

Because of its compact design, the team’s device can be used in almost any building with central air-conditioning systems, from commercial and residential buildings to schools.

Integrating knowledge of architecture and engineering learned at CityU, the team improved the operation of current water towers.

“I have studied building services engineering at CityU, and so I have some knowledge about building design,” Lai Chun-tak said. “That’s why I chose air conditioners as the focus of our study. They have the largest power consumption among all electrical appliances.”

Lai Chun-tak said the teams’ success was a joint effort. “Combining our teammates’ knowledge about building and electronic engineering, we successfully improved the energy transfer and operation structure of the device and enhanced its energy conversion ratio and feasibility,” the student said. 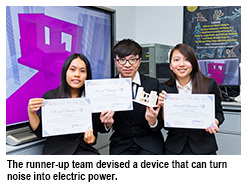 The team that won the runner-up position was formed by students Leung Wai-chung, Fok Hau-ching and Lo Tsz-kwan from the Department of Architecture and Civil Engineering.

They developed a system that offers citizens relief from noise over 70 decibels generated by Hong Kong’s more than 600 highways.

Their dome-shaped sound system equipped with piezoelectric plates can convert noise into electric power. It uses energy collected and converted from plants, solar panels, a drainage system and daylight harvesting device and pipes to operate an automatic sprinkler system. The design not only improves sound absorption, it also helps “green” the environment.

The two teams thanked for the support offered by CityU’s various units, including the Office of Education Development and Gateway Education and the Division of Building Science and Technology.

Both teams attributed their success to the high feasibility of their designs and the use of advanced 3D printing technology to reproduce their devices, making it easier to offer clear explanations on operational details.

“We have used actual objects for clear and specific illustration of the design of our device, so the panel judges could easily understand how it operates,” said Kam Chun-wing. “In addition, the professional training on presentation skills offered by CityU’s Gateway Education boosted our language proficiency and confidence.”

The HKIE Joint Institutes Competition required each team of two to five students to submit a proposal for an environmentally-friendly device that can reduce pollution or promote a carbon-neutral life style in Hong Kong.

Eight teams were selected for the final round of the competition based on their proposals’ practicability, creativity and originality as well as economic feasibility and contributions to environmental conservation.

The teams needed to make presentations of their proposals in person to the panel judges for them to determine the winners.