A Golden Key for CityU Scholars

Scholarship recipients, past and present, at City University of Hong Kong (CityU) can now share information and experience through social media network and leadership training programmes thanks to the newly launched CityU Golden Key Club. 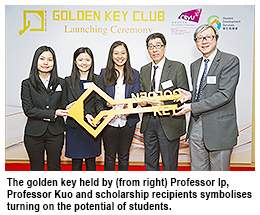 The CityU Golden Key Club, which has already seen over 140 graduates sign up, will strengthen the competitiveness of graduates in their career development.
Activities such as leadership training will further expand the social network of its members, and provide more opportunities for them to get involved with their alma mater and the community.
Out of the 100 scholarship recipients who attended the launching ceremony on 23 April, 12 were CityU past scholars. Some of them graduated almost 20 years.
Professor Way Kuo, University President, said in his welcoming address that the number of CityU scholarships had been on the rise, with about 400 donors offering scholarships to CityU students annually for various programmes.
“Many of you sitting here today are scholarship awardees. When you later develop a successful career, I hope you will also become a donor to help CityU students and nurture talent for the University and society,” he said. 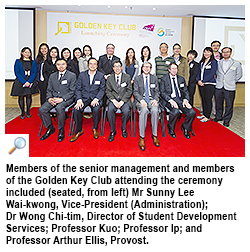 Professor Horace Ip Ho-shing, Vice-President (Student Affairs), said that the Golden Key Club symbolised a key that could unlock the potential of students, yet the key needed the concerted effort of social and industrial leaders to cast and produce it. To highlight this point, a 3D printing machine for producing the 3D golden keys was featured at the ceremony.
In the same vein, while scholarship recipients should try to improve their academic performance, the key needs continuous polishing through training and counselling from professionals, he said.
Two scholarship awardees spoke at the ceremony. Dr Andy Chin Chi-on, holder of a Master of Philosophy from CityU, used a Sir Edward Youde Memorial Fellowship for Overseas Studies in 2000 to pursue a doctoral degree in linguistics at the University of Washington in the US.
He said that the scholarship had provided financial support, recognised his academic achievements, and encouraged him to continue his academic pursuits. 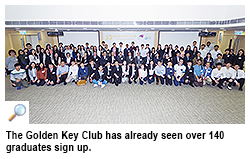 Rainbow Chan Hui-ling, a Year 3 student in the Department of Mechanical and Biomedical Engineering, used the 2014 Innovation and Technology Scholarship jointly sponsored by HSBC and the HKSAR Innovation and Technology Commission to join an exchange programme at the University of California, Berkeley for one semester.
150505-3_key_L.jpg She said the exchange had helped her expand her vision and had encouraged her to use her technology knowledge for the benefit of society.
Members of the Golden Key Club and professionals will also be able to exchange ideas via a Facebook group and online forum.
When the new academic year starts this September, the club will host a series of activities such as small group counselling as well as seminars and workshops hosted by professionals.