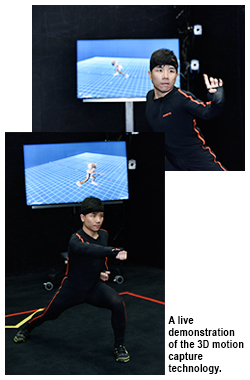 A total of 19 kung fu styles and 120 forms have been captured for the archive using state-of-the-art 3D motion capture technology developed by CityU’s Centre for Applied Computing and Interactive Media (ACIM). Styles and forms include the Lam Family Hung Kuen, Wing Chun and Fujian Yongchun White Crane.
Different martial art styles/ schools make use of various models of body mechanics which until now are mostly orally transmitted, often in a language crouched in esoteric terms. This knowledge is now in danger of becoming lost because of the dwindling number of practitioners in some styles. The project provides a sure way of documenting and preserving this legacy.
IGA has raised funds via FringeBacker, an online crowdfunding platform, for the project and has received support from the Lau Kar Leung Film Boxing Director Charitable Foundation, allowing the archive to preserve this intangible cultural heritage in Hong Kong.
A cheque presentation ceremony held at CityU on 29 April featured a live demonstration of the 3D motion capture provided by kung fu masters. 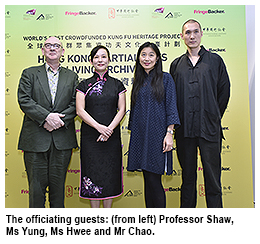 The officiating guests included Mr Hing Chao, Founder of International Guoshu Association; Professor Jeffrey Shaw, Dean of School of Creative Media; Ms Maryann Hwee, Executive Director of FringeBacker; and Ms Yung Ching-ching, Founder of Lau Kar Leung Film Boxing Director Charitable Foundation.
“We have the best motion capture studio in Hong Kong. It was very welcome when IGA approached us,” said Professor Shaw at the ceremony. “We saw an opportunity to make use of the resources in terms of intangible cultural heritage, specifically Chinese martial arts and given the situation with these great martial art masters here in Hong Kong, we really welcome this opportunity to do this documentation.”
Mr Chao thanked CityU and Professor Shaw for their support.
150430-2_sharing_L.jpg

“We would not be here, and would never have the opportunity to apply the most cutting-edge technology in the world today to document something that I, representing IGA, believe is essential to culture, not only in terms of performance, but also for people over the world,” he said.
In this project, ACIM will render the different kung fu styles and forms captured as computer animation. By using high-definition, high-speed 3D video capture of sequences, the activity of annotation itself will be transformed to include such physical data concerning speed, torque, torsion and force. The data capture process is a complete 4D analysis of martial arts.
The archive database is structured on multiple media types and ingests information based on the complete lexicon of Hong Kong kung fu. A controlled keyword vocabulary (the Hong Kong martial arts thesaurus) and item-level descriptions define the fields for data entry.
The archive will become a source for exhibitions and installations that can promote these rich cultural traditions and a vital source of ongoing research. It will also provide benchmarks in the formation of extensive analytics tools and intangible heritage documentation and become a milestone in the establishment of digital database with multimedia technology.