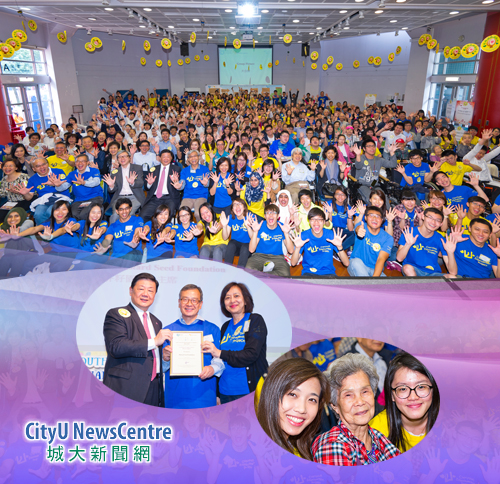 The City-Youth Empowerment Project (CYEP) celebrated its 10th anniversary on April 25 at City University of Hong Kong (CityU).
Over 400 people attended “Happy Carnival 2015”, which was themed “A Decade of Dedication”.
Mr Herman Hu Shao-ming, Council Chairman, said in his speech that the theme signified how CYEP had transformed over the last 10 years, and that the joy of witnessing this fruition was like witnessing a tree blossoming.
He thanked the sponsors and supporting organisations for their substantial support, which, he said, had helped build a platform for service users and CityU volunteers to learn from each other.
At the carnival, organisers set up booths and arranged activities such as a large-scale and collective art project, an African drum circle and music jamming, a South Asian street food corner, and music and dance performances.
Guests included Professor Horace Ip Ho-shing, Vice-President (Student Affairs), Dr Raymond Chan Kwok-hong, Dean of Students, Professor Lo Tit-wing, Head of the Department of Applied Social Sciences, and Dr Elaine Liu Suk-ching, Convener of CYEP.
The CYEP, a non-credit voluntary service learning programme, trains CityU students to conduct volunteer work and promote long-term regular social services.
Since the project was set up in 2005, student volunteers had accumulated over 100,000 service hours, and the annual number of registered volunteers has grown to nearly 1,800.