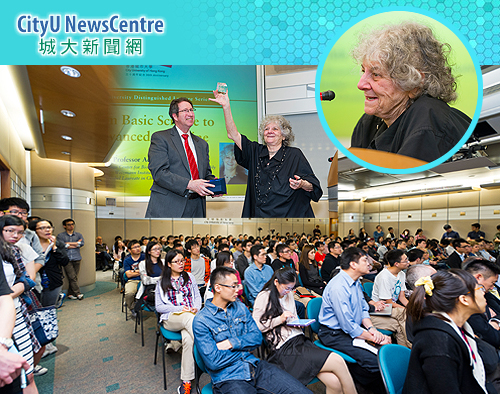 Professor Ada Yonath, 2009 Nobel Laureate in Chemistry, discussed the process of the translation of the genetic code, a basic and most important process of life, in the latest talk in the City University Distinguished Lecture Series, on 21 April.
“As a scientist, I want to understand the major process of life which is the translation of the genetic code into proteins,” said Professor Yonath, who has devoted her life to studying ribosomes. Ribosomes are the universal cellular multi-subunits molecular machines that translate the genetic code into proteins. Professor Yonath has successfully generated 3D models that show how different antibiotics bind to the ribosome and how bacteria become resistant to antibiotics.
These models have revolutionised the field of structural biology and paved the way for improvement of existing antibiotics, the design of advanced therapeutics as well as minimising antibiotics resistance, directly assisting the saving of lives, according to Professor Yonath. The lecture attracted a packed house.
It was the first time Professor Yonath had visited and had given a lecture at CityU. She said she was impressed by CityU and would think about collaborating with the University.
“Professor Yonath’s visit is very timely because we have made life sciences as a major initiative for the next year,” said Professor Arthur Ellis, CityU Provost, during his welcoming remarks. “Professor Yonath symbolises the effort of an individual made can be transformational. Her persistence in research is the element that we try to impart in CityU students.”
Professor Yonath is the Director of the Helen and Milton A. Kimmelman Center for Biomolecular Structure and Assembly of the Weizmann Institute of Science. She received the Nobel Prize in Chemistry in 2009 along with two other scientists for her studies on the structure and function of the ribosome, making her the first woman in 45 years to win the Nobel Prize in Chemistry.