Professor Way Kuo, President of City University of Hong Kong (CityU), and leading figures in the field of science and engineering shared their insights at a summit on innovation and technology in Hong Kong and the Pearl River Delta (PRD) on 13 to 14 April.

Jointly organised by the Chinese Academy of Engineering (CAE) and the Hong Kong Academy of Engineering Sciences (HKAES), the summit provided a timely platform where partnerships could be forged among universities, research institutes, industry and governments to explore and advance the development of the innovation and technology industry in Hong Kong and PRD.
Professor Kuo said at the summit that a Harvard professor once said the US government had adopted four fundamental principles for innovation and technology development: promoting research without differentiating between fundamental and non-fundamental research; only providing general guidelines; not telling people what to do; and never micromanaging, and only setting up a strategy and providing enough money.
He added that in Hong Kong, Taiwan and the mainland, the governments tended to do more micromanagement, which may be due to hierarchy in Chinese culture. He suggested learning from Americans who generally trust others to work with greater autonomy. 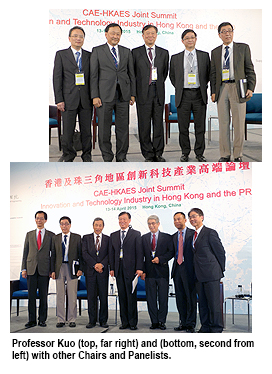 Professor Kuo also commented on the choices that Hong Kong high school graduates make when choosing their field of study at university. “Among the top 100 high school graduates, none chose engineering or science as their first choice. In other countries, this is not the case. The Hong Kong government may look into this phenomenon.”
Professor Lu Jian, CityU Vice-President (Research and Technology), also spoke at the summit. He suggested that the Chinese government invest in the enhancement of new discovery capacity and encourage companies to develop their unique core technology, such as technologies for aircraft, super computers, high speed trains and nuclear reactors, as a way to promote innovation and technology.
CityU was one of the sponsors of this two-day event hosted by The Hong Kong Polytechnic University. The distinguished guests who spoke at the opening session were Professor Zhou Ji, President of the Chinese Academy of Engineering; Mr John Tsang Chun-wah, Financial Secretary of the Government of Hong Kong SAR; Dr Victor Fung Kwok-king, Group Chairman of the Fung Group; and Professor Hou Jianguo, Vice-Minister of the Ministry of Science and Technology, China.
A number of important issues for the development of innovation and technology industry in Hong Kong were addressed, including the role of government, research funding, knowledge transfer/exchange, commercialisation, and cooperation between Hong Kong and the PRD region.