A delegation of City University of Hong Kong (CityU) promoted the University and strengthened ties with partners in Japan, while deepening their understanding of Japan’s latest developments and culture, during a visit from 19 to 22 March.
H 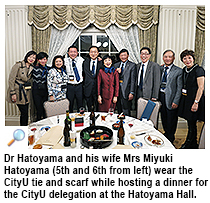 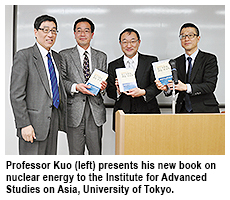 The delegation exchanged insights at UTokyo about the impact of Chinese literature on Japanese society with Professor Osamu Takamizawa, Director of the Institute for Advanced Studies on Asia, UTokyo, and Professor Yasushi Oki, Immediate Past Director of the Institute. Professor Oki presented three books on Chinese literature studies to Professor Kuo; in return, Professor Kuo presented his new book Critical Reflections on Nuclear and Renewable Energy.
150401-3_Tokyo_L.jpg
For business exchange, the delegation went to Toshiba Elevator and Building Systems Corporation where the group’s senior management showcased the factory plant and training centre. The latter also presented the company’s business development and future plans from a global perspective. 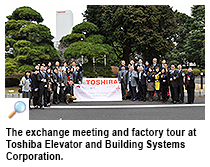 150401-3_Tokyo_L.jpg Toshiba representatives introduced the world’s fastest elevator, which is located in the super tall Taiwanese building, Taipei 101. Other signature projects include Tokyo Skytree and Nina Tower in Hong Kong.
During the visit to Hatoyama Hall, Dr Hatoyama, who has a close affiliation to CityU, delivered a speech on fraternity and vision in the East Asian Community in his capacity as President of the East Asian Community Institute.
“Building an East Asian community that embodies international relations based on the spirit of fraternity would bring the greatest happiness not only to the region’s nations, but also to the people of those nations,” he said. 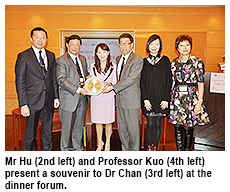 He also introduced the house and gardens in Hatoyama Hall, which commemorates the Hatoyama family’s contributions to politics and education in Japan. Dr Hatoyama is also Honorary Advisor (Economics and Cultural Exchange) for the Society.
In addition, the delegation attended the first-ever CityU alumni gathering in Japan. The dinner event was attended by over 50 participants including alumni living in Japan. Dr Chan, the honourable guest, shared her experiences in Japan, such as her career development, her family life and charity work. 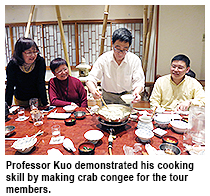 The Eminence Society was established in 2010 by enthusiastic and supportive senior alumni committed to contributing their expertise, networks and resources to benefit the University and serve the community at large. There are currently over 200 members, comprising successful entrepreneurs, business executives and senior professionals from various sectors.
​
​​