New technology developed by researchers in the Department of Electronic Engineering at City University of Hong Kong (CityU) can enhance the effectiveness of “bionic eyes”, creating more stable images for people suffering from visual impairments. 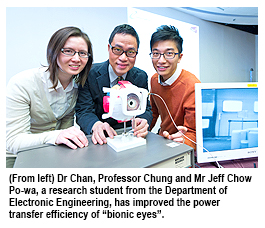 Professor Henry Chung Shu-hung, Dr Leanne Chan Lai-hang, Assistant Professor, and their team have found a way to improve the power transfer efficiency of “bionic eyes”, which also reduces the users’ exposure to radiation, and extends the life of the portable battery.
“Bionic eyes”, also known as retinal prostheses, work via a wireless telemetry system made up of a transmitter, a receiver and two sets of coupled coils with one set at the transmitting side and another one at the receiving side. The glasses are equipped with a wireless power transmitter that generates high-frequency alternating magnetic fields to the receiving coils and matching network implanted in the eyeballs, providing electricity to the built-in artificial chip implanted in the eyeball. The chip converts visual images into electrical signals that stimulate the intact retinal neurons, producing perception for the user.

“The problem with the previous technology is that any misalignment between the transmitting coils in the glasses and the receiving coils in the users’ eye diminishes the power transfer efficiency,” said Professor Chung.
“Avoiding misalignment is a challenge because the orientation and distance between the glasses and the eyeballs may change when the user is going about his or her daily life. The lack of efficiency consumes more power of the portable battery and shortens its operating hours,” he said.
The CityU innovation is the development of a new coil structure and a matching circuit that can allow a relatively larger misalignment between the glasses and the eyeball. Even if the glasses slide from the user’s nose and become slanted, electrical power can still be effectively transmitted to the receiving coil set in the eyeballs.

In the current system of “bionic eyes”, the transmitting and receiving coils are one-dimensional and are placed in parallel for power transfer. In contrast, the new CityU receiving coil set has a multi-dimensional structure and the improved matching network design can maximise the power transfer efficiency under misalignment.
Compared with current technology, CityU’s new architecture can also allow for an increase in lateral misalignment of 50% and an expansion of the transmitting angle of over 200%, which means that the efficiency of the power transfer can be maintained at a relatively higher level even if there is a greater lateral and angular misalignment. Another benefit is that battery life can be extended and the battery itself made smaller.
CityU’s new technology may also be used in other biomedical implants.