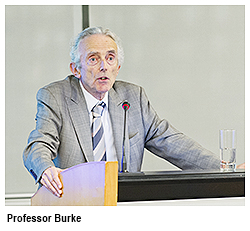 Loners toiling away in isolated labs, exiles ruminating in dusty libraries far from the madding crowd, or solitary figures striding across the hills jabbering to themselves in the search for that elusive magic moment of inspiration.
If any of these stereotypical visions match with your idea of how an innovator might behave in the quest for innovation, you would stand half in agreement with Professor Peter Burke, Emeritus Professor of Cultural History at the University of Cambridge and Fellow of British Academy, who gave the latest City University Distinguished Lecture, held on 26 November.
In an eclectic talk that left the audience with much to ponder on the subject of innovation in history, Professor Burke reviewed the possible conditions likely to be conducive for innovation to occur. 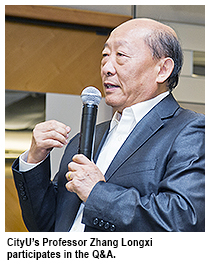 With reference to sixteenth century Florentine painters, nineteenth century anthropologists and twentieth century schools of history, among others, Professor Burke explained how innovators often shared certain traits and backgrounds. They were not necessarily more intelligent than their peers, but they most probably worked harder, and, more importantly, often had less to lose.
That is, innovators tended to come from the margins and the provinces. They were often outsiders prone to taking risks since they were detached from conventional ways of thinking, Professor Burke said, and they were nomadic, bringing to new fields of study a level of disciplinary displacement and cognitive diversity that could create that magic moment of innovative thought.
But, outsider or not, people who innovate did not work in isolation the whole time, Professor Burke insisted. “The propensity to innovate actually depends on collaboration and exchange,” he said.
For instance, the American geneticist James Watson must have spent hundreds of work hours alone on the structure of DNA, but his achievements were the result of intense collaboration not only with Francis Crick but also with the (unfairly) less known figures of Rosalind Franklin and Maurice Wilkins. In 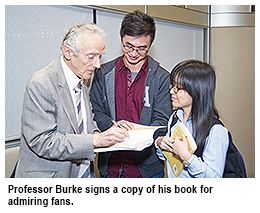 addition, Professor Burke said, informal conversations, perhaps in a pub or a cafe, were also important to the development of ideas.
“Small groups, face to face, with people of common interests and different backgrounds are the ideal locus for innovative ideas to take place,” Professor Burke said
He explored this thought further citing recent news from Japan concerning Talk Rooms in corporations where workers were encouraged to interact in a less formal manner, often with sake and tea to hand, as a method of inspiring creative thinking.
In addition, competition was an important driver of innovation, Professor Burke explained, reminding the audience that Watson and Crick were competing fiercely against other teams in their work on the double helix.
Professor Burke was less enthusiastic about the institutionalisation of innovation whereby governments believe establishing centres of innovations or taskforces, for example, will boost creativity, and he was critical of institutions, including universities, for sometimes impeding innovation by sticking to tradition.
“Institutions have blocked innovative thinking at times through censorship, repressions and a concern of deviating from established norms,” he said, arguing that Spain, a creative dynamo in the Middle Ages, closed up in the sixteenth century under the influence of the Spanish Inquisition and other aspects of the Catholic Church, and retreated into isolation.
“Closed systems and closed minds hinder innovation,” he said.
While admitting that he was not a futurologist and could not predict how, when, where and by whom innovation would take place, he was certain that without collaboration and without a plural, diverse, tolerant culture for people to work in, innovation was likely to be supressed by more routine ways of thinking.
That was what history taught us. “We can learn from the past to break from the past,” Professor Burke concluded.