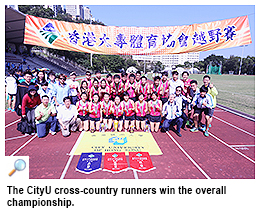 Athletes from City University of Hong Kong (CityU) excelled in the cross-country running competition organised by the University Sports Federation of Hong Kong, China on 16 November.
The CityU cross-country runners won the overall championship, the women’s overall championship for the third year in a row, and the men’s overall first runner-up.
One hundred and seventy-eight athletes from 11 tertiary institutions participated in the competition. The women’s groups had to run 4.6 kilometres around the campus of the Chinese University of Hong Kong, while the men’s groups had to finish 6.1 kilometres. A steep stretch of more than one kilometre in the course posed a big challenge to the speed and stamina of all the athletes. 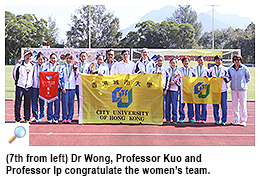 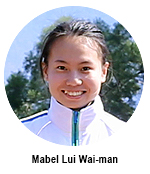 Mabel Lui Wai-man, a student from the Department of Management, won the championship in the women’s event in a time of 19 minutes 7 seconds, breaking her own record.
“I am delighted with my performance during the competition,” she said. “Also, I am very grateful to Professor Zhou Nan of the Department of Marketing, and Ms Julyanna Chan Lai-ping, Supervisory Executive Officer in the Department of Management, for their strong support and encouragement.”
Professor Zhou and Ms Chan are honorary captains of CityU’s cross-country team.
Mabel was the trainer of the women’s team for the competition who set the training schedule for her teammates. They started preparations in July and trained twice a week after the academic year started. 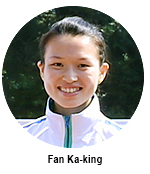 Fan Ka-king, captain of the women's team and a student from the Department of Marketing, won the second runner-up in the women’s group. She said she was very happy with her race, as she was not feeling well before the competition and had been worried about her performance.
Mak Yun-leung, captain of the men’s team and a student from the Department of Chinese and History, said the team had some new runners in it and they had trained for only a short period of time. However, he was confident that they would perform better in future competitions as they had great capability and a close friendship.