​The Director of the National Palace Museum (NPM) in Taipei discussed how the NPM has developed in response to social changes over the past 50 years at a CityU Distinguished Lecture organised by City University of Hong Kong (CityU) on 3 November. 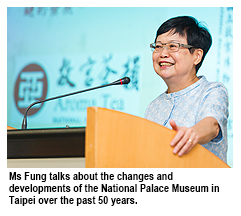 Ms Fung Ming-chu’s lecture was titled “Challenges and Changes—Development of National Palace Museum over the last 50 Years”.
Ms Fung began her talk with a brief history of the NPM, which was formerly established in Beijing (then Beiping) in 1925, and re-opened in Taipei in 1965. Since then, the museum collections have grown steadily, the organisation structure has expanded and the NPM’s prestigious international reputation has grown.
However, the tremendous social changes in the recent 30 years have also presented significant challenges.
To keep abreast with the new digital technology age, the NPM has created 21 digital collection databases, established an international website with information translated into nine languages, launched English and Chinese e-newsletters, and offered online learning resources.
These initiatives are just like adding a new museum with no walls to the NPM. Also, by harnessing the power of new media, the NPM has re-created classical artworks. For example, the painting “One Hundred Horses” by Giuseppe Castiglione, Italian missionary and court painter in the Qing Dynasty, has been re-produced as a long-scroll animation. Also, the re-invented digital artworks of “New Waves of NPM” exhibitions have been presented in cities around Taiwan. 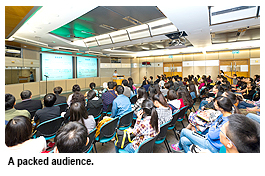 In response to a public appeal for “equal treatment for the south and north regions and cultural arts for all places in Taiwan”, the NPM has held exhibitions in each county and city of Taiwan. It even went to remote mountain areas.
As a major initiative to support this concept, its southern branch in Chiayi County will open up to the public by the end of next year. Also, to accommodate growing interest in local culture, the NPM has organised exhibitions for historical scripts, maps and paintings related to Taiwan. Special tour guide services will be arranged for the underprivileged at these exhibitions.
In addition, the NPM has developed creative cultural products related to the museum since the 1980s. At first, it produced only postcards and replicas of cultural relics. Now it has established its brand by licensing the use of its name and collaborating with manufacturers to produce souvenirs. The cultural product business not only expands NPM revenue, but also promotes the development of downstream cultural art industries.
The number of visitors to the NPM has been on the rise in recent years. To meet public demand, the museum has to limit the number of daily visitors and extend its opening hours. In the meantime, the “National Palace Museum Expansion Construction Plan” is rebuilding old buildings and expanding its existing building complex. 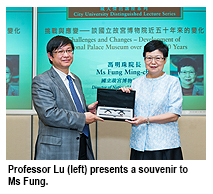 “The tremendous changes affecting the NPM are not what we originally planned for. They are the result of public demand and social changes that have driven us to keep up with the times and evolve with the changing environment,” Ms Fung said, adding that the NPM has made a quantum leap forward for development by coping with different challenges.
At the end of Ms Fung’s talk, Professor Lu Jian, Vice-President (Research and Technology), said a new chapter of cultural and art exchanges between Hong Kong and Taiwan began when CityU and the NPM signed a memorandum of understanding in October.
Exhibitions from the NPM will soon be presented for the first time in Hong Kong. The acclaimed new media art exhibitions “Qianlong C.H.A.O.” and “Rebuilding the Tongan Ships” are planned to be showcased on the CityU campus and at other local public museums in 2015.