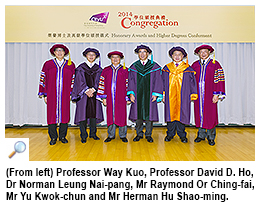 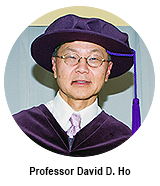 Professor David D. Ho, a distinguished academic who has been at the forefront of AIDS research for 33 years, received an Honorary Doctor of Science. Professor Ho is the founding Scientific Director and Chief Executive Officer of the Aaron Diamond AIDS Research Center, and the Irene Diamond Professor at The Rockefeller University. He is a major driving force behind the medical breakthrough in controlling HIV in patients. His studies unveiled the dynamic nature of HIV replication in vivo and revolutionised people’s basic understanding of this disease. This knowledge led Professor Ho to champion combination antiretroviral therapy that has resulted in unprecedented control of HIV in patients. His team is now devoting considerable efforts to developing vaccines to halt the spread of the virus that causes AIDS. Furthermore, he is now leading a consortium of Chinese and US organisations to help address the HIV/AIDS challenges in China.
Professor Ho has received numerous honours and awards for his scientific accomplishments, including 12 honorary doctorates and the Presidential Medal in 2001 from the US Government, among others. He was inducted into the California Hall of Fame in 2006 and was named Time magazine’s Man of the Year in 1996. He has been elected as a member of the American Academy of Arts and Sciences, Academia Sinica, Chinese Academy of Engineering, and the Institute of Medicine, National Academy of Sciences in the US. 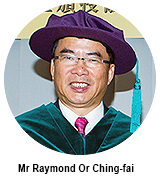 Mr Raymond Or Ching-fai, Chairman and Chief Executive of China Strategic Holdings Limited, received an Honorary Doctor of Social Science. Mr Or, a renowned banker, started his career as a management trainee at The Hongkong and Shanghai Banking Corporation Limited in 1972. He worked his way up the career ladder and was promoted to General Manager in 2000 and Director at the beginning of 2005. In May 2005, he took up the position of Vice-Chairman and Chief Executive of Hang Seng Bank. At present, he is also Chairman of Esprit Holdings Limited and Vice-Chairman of G-Resources Group Limited.
Mr Or is active in public service and the higher education sector. He has been, among other roles, Chairman of the Hong Kong Association of Banks in 2000 and 2003, Chairman of the Financial Services Advisory Committee and a Member of the Services Promotion Programme Committee of the Hong Kong Trade Development Council, a Member of the Risk Management Committee of the Hong Kong Exchanges and Clearing Limited, Deputy Council Chairman of CityU and a Council Member of the University of Hong Kong, a Member of the Chinese People’s Political Consultative Conference Beijing Committee and the 5th East Asian Games Planning Committee. He is currently a Vice-Patron of the Board of the Community Chest of Hong Kong and is also a Justice of the Peace. In recognition of his contributions to society, Mr Or was awarded a Silver Bauhinia Star from the HKSAR Government in 2009. 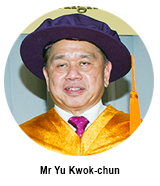 Mr Yu Kwok-chun, Chairman of the Yue Hwa Group and Chairman of Yue Hwa Chinese Products Emporium Limited, received an Honorary Doctor of Business Administration. Mr Yu graduated with a Bachelor of Arts (Commerce) degree from Macquarie University, Australia in 1973 and joined Yue Hwa Chinese Products Emporium Limited in 1974.
In addition to leading his emporium, Mr Yu is committed to serving Hong Kong and mainland China. His many present public roles include being a Standing Committee Member of the 12th National Committee of the Chinese People's Political Consultative Conference, Founding Chairman & First President of the Federation of Hong Kong Guangdong Community Organisations Limited, Chairman of Hong Kong Federation of Overseas Chinese Associations, Standing Committee Member of the Chinese General Chamber of Commerce, and Advisor to The All-China Federation of Returned Overseas Chinese. He was Chairman of the Small and Medium Enterprises Committee, Member of the Committee on Governance and Political Development of the Commission on Strategic Development, Member of the Trade Advisory Board, and Member of The Greater Pearl River Delta Business Council of the HKSAR Government, among others. He was made a Justice of the Peace and received a Silver Bauhinia Star and a Gold Bauhinia Star from the HKSAR Government in 1998, 1999 and 2006 respectively in recognition of his contributions to society.
In addressing the graduates in his note of thanks, Professor Ho thanked CityU for the honour and talked about the core values of success, such as passion, a deep commitment to excellence and the audacity to make bold decisions and to take informed risks. To conclude his speech, he said, “It is important to strike the right balance between planning and doing, between strategy and execution, and between vision and action. Make regular appointments with yourself for a quiet time to think and to strategise, no matter what your discipline is. Remember this old Japanese proverb: ‘Vision without action is a dream; action without vision is a nightmare’.”
Mr Herman Hu Shao-ming, Council Chairman, and Professor Way Kuo, President, also attended the ceremony. 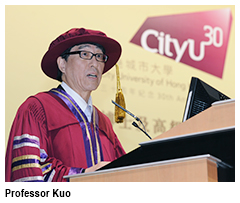 In his speech, Professor Kuo urged graduates to be active alumni as they develop their careers, and later in life, too, when they have established themselves professionally and can pass on their experience and learning to the next generation. “Life evolves and revolves; change is constant; and when it is your turn to give back to society, we trust that you will do so with passion and energy, remembering how your departments, schools, colleges, friends and family helped you along your academic journey,” he said.
The 2014 Congregation is being held from 11 to 20 November. This year CityU produced 7,732 graduates through its provision of quality professional education, comprising 263 doctor of philosophy degrees, 26 doctor of business administration degrees, four doctor of juridical science degrees, four engineering doctorates, nine master of philosophy degrees, 3,128 master’s degrees, 190 postgraduate diplomas/certificates, 3,733 bachelor’s degrees, and 402 associate degrees.