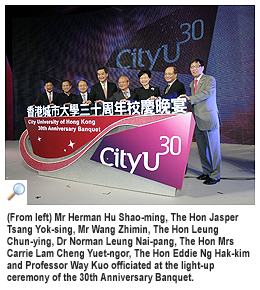 A festive banquet brought together more than 800 supporters, alumni, students, faculty and staff at City University of Hong Kong (CityU) to celebrate the 30th anniversary.
The banquet, which was held on 1 November at the Hong Kong Convention & Exhibition Centre, started with an animation titled “A Creative Journey”, created by a CityU alumnus, which showed the audience the wonderful campus life at CityU.
The light-up ceremony was officiated by The Hon Leung Chun-ying, Chief Executive of HKSAR and Chancellor of CityU, Mr Wang Zhimin, Deputy Director, Liaison Office of the Central People’s Government in the HKSAR, The Hon Mrs Carrie Lam Cheng Yuet-ngor, Chief Secretary for Administration of HKSAR Government, The Hon Jasper Tsang Yok-sing, President of the Legislative Council, The Hon Eddie Ng Hak-kim, Secretary for Education of HKSAR Government, Dr Norman Leung Nai-pang, Pro-Chancellor and Chairman of CityU’s 30th Anniversary Organising Committee, Mr Herman Hu Shao-ming, Chairman of the Council, and Professor Way Kuo, CityU President, followed by a toast to all guests.
“We offer world-class professional education for everyone, not for the rich or the elite, but for the ordinary people of Hong Kong. That, in my opinion, is our greatest achievement over the past 30 years: helping people to upgrade their skills and their knowledge, moving up in society and contributing to the development of Hong Kong and beyond,” said Dr Norman Leung in his welcoming remarks. 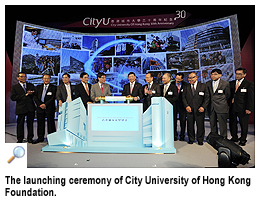 Mr Herman Hu congratulated CityU on its remarkable progress and development. “CityU is committed to nurturing and developing students’ talent and creating applicable knowledge to support social and economic advancement,” he said. The vision for CityU is encapsulated by the creation of three major new schools over the past few years: the School of Creative Media, the School of Energy and Environment and the School of Veterinary Medicine, he added.
The Hon Leung Chun-ying said, “CityU started as a polytechnic with 1,200 students in October 1984. CityU today has more than 20,000 students, and more importantly, it has established itself as one of the Asia-Pacific leading universities. As the chairman of CityU Council from 2008-2011, I am particularly pleased to know that CityU is ranked 11th in Asia and 5th in the top 50 universities under 50 years of age. ” 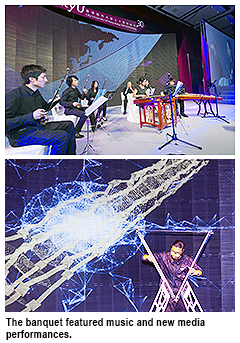 The Banquet featured a video presentation titled “Our Professional Commitment” showcasing 30 years of dynamic growth at CityU, and a new media performance named “Anádelta”, a digital installation that consists of a 3-axis controlling device for playing music and visual in performance in an unconventional way.
In his remarks, Professor Kuo thanked all the teachers, students, and staff who had worked tirelessly on behalf of the University as well as the dedicated Council Chairs and Members, both past and present, for their valuable leadership and support.
The highlight of the evening was the launch of the City University of Hong Kong Foundation, a landmark initiative for strengthening ties with our benefactors, bolstering the University’s fundraising capabilities, and ensuring financial sustainability in the pursuit of academic and research excellence. 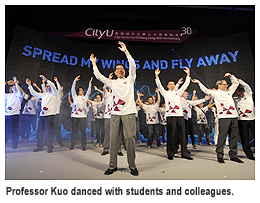 Donations made to CityU, whether for the University’s overall development or simply earmarked for designated projects, will be counted towards CityU Foundation membership.
The finale of the evening came with a dance performance/animation. A number of professional dancers and dozens of local and international CityU students danced in the amazing effects of digital projections and computer animation. Professor Kuo, staff members and guests danced with the students to bring a joyous climax to the banquet.