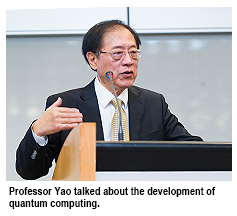 It was standing-room only when one of the world’s most distinguished theoretical computer scientists gave a talk on quantum computing for the City University Distinguished Lecture Series on 27 October.

The essence of the talk was to promote the idea of quantum computing, what it means, how it might work and what benefits it might bring to human society, according to the speaker, Professor Andrew Yao Chi-Chih, Dean of the Institute for Interdisciplinary Information Sciences at Tsinghua University and Distinguished Professor-at-Large at the Chinese University of Hong Kong.

Quantum computing differs greatly from classical computing, which is based on the digital model devised from Alan Turing’s models of the 1930s, and instead looks at the power of the atom to process data at much faster speeds. 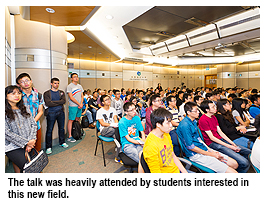 Great science often happened when a new kind of disruptive science enabled new explorations that were previously unimaginable, he said, and when different disciplines and scientific theories interacted.

Quantum computing is revolutionary in the sense that it depends not on the digital concept upon which all our computer devices today are based on, but on enhancing the power of atoms and particles.

Rather than encoding data into binary digits and processed by transistors, as in classical computing, the quantum variety sees computing theoretically allowing for data to be encoded in a quantum, non-binary state, i.e. in superpositions of states.

This would mean that, potentially, millions of data operations could be processed simultaneously, according to quantum theory.

Although Professor Yao admitted that the technology for developing quantum computing was a long way off, he noted that countries around the world, in the US, Europe, China, Singapore, Japan, among others, were pouring money into development.

For example, Tsinghua University, where Professor Yao holds a position, is working on the Quantum Network Project based on quantum information technology.

“Twenty years ago the very idea of quantum computing was pie in the sky,” he said. “But it will become a reality sooner than you think!”

Using the chronological development of the digital computer as a benchmark, Professor Yao said we now stood at the transistor stage.