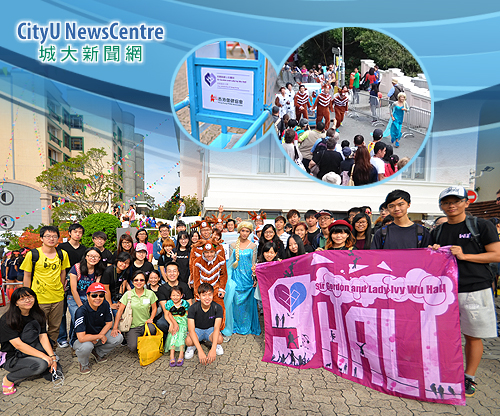 A group of compassionate students from Sir Gordon and Lady Ivy Wu Hall at City University of Hong Kong (CityU) in collaboration with Hong Kong PHAB Association joined a charitable event called the “40th Sedan Chair Race & Bazaar” on 26 October.
The students ran the 2.1-kilometre race at Victoria Peak in a team named “CityU Wuddies and PHAB”. The name “Wuddies” originates from the surname of Sir Gordon and Lady Ivy.
Dressed like characters from the popular movie Frozen, the team set off from Matilda International Hospital with a heavy wooden sedan chair measuring 3.5 metres by 1.5 metres and decorated as a sledge. They said they hope to spread the message, “Love can thaw everything, even a frozen heart”, through this race.
With great team spirit and endurance, they ran up the hill, raced around the Peak and returned to the hospital. By joining this event, the students helped raise funds for the Sedan Chair Charities Fund, which organises this fun and meaningful challenge every year.
In addition to the race, there is a bazaar that raises money for other charities, too.