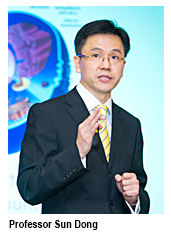 About 20 years ago, he started exploring the use of robotics to move physical objects, and 10 years later he began to apply the same ideas and concepts to bioengineering, research that has led to a suite of projects that hold great promise for health-related matters.
Professor Sun Dong, Head and Chair Professor of the Department of Mechanical and Biomedical Engineering at City University of Hong Kong (CityU), introduced the audience at the latest talk on 20 October in the “President’s Lecture Series: Excellence in Academia” to new frontiers in bioengineering with a thorough exploration of single cell manipulation using robotics.
Professor Sun began by pointing out the crucial differences between robots and robotics: the former is a programmable machine that imitates the actions or appearance of an intelligent creature – usually a human; whereas the latter is the branch of mechanical engineering, electrical engineering and computer science that deals with the design, construction, operation, and application of robots.
Reviewing work at CityU in this field, he described the advantages of new tools that did not exist a few years ago, pointing out how they provide mechanistic insights into the disease process that could not be achieved with bulk tissue evaluation, the previous approach to examining cells.
“But we wanted to know if we could find new methods to expose properties of cells that were previously unknown to aid in disease therapy,” Professor Sun said. 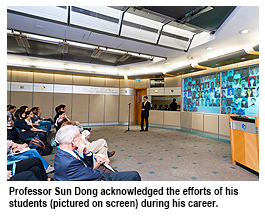 He outlined four mechanisms for probing manipulating cells: cell stretching, cell migration, cell fusion, cellular engineering, all of which are areas of expertise for Professor Sun and his team.
In terms of cell stretching, Professor Sun said, “Quantitative understanding on the interrelation between cell mechanical and biological behaviours helps understand how normal cells are driven to disease states.”
Regarding cell migration, a number of insights have been recorded.
“We now understand more about the mechanism of cell migration, using our unique cell migration tool,” Professor Sun said. “Cell migration control will have great potential to clinical applications.”
However, one technical barrier is how to further develop an in vivo mobile micro/nano robot that can stimulate the cell to migrate inside the body.
The third key area is cell fusion, a cellular process of combining two or multiple cells to form a single entity, a process evident in embryo, organ and tumour development, and which is useful in the study of gene expression, chromosomal mapping, antibody production, cancer immunotherapy and cell reprogramming.
Professor Sun said that applications in stem cell fusion were especially exciting with impacts identified in areas such as cell differentiation and maturation, which can help medical doctors deliver more precise drugs to combat diseases and cell reprogramming.
In addition, there is great promise for creating patient/disease-specific stem cells that could lead to developments in cell transplantation therapy, a process that helps to mitigate against the possibility of immune rejection after organ transplants.
The final area that Professor Sun discussed was cellular engineering.
“Cellular engineering has emerged as a new area as biomedical engineering has shifted from the organ and tissue level to cellular/sub-cellular level,” Professor Sun said. “A cornerstone of much of this activity is cell culture technology, i.e., growing living cells in the artificial environment of a laboratory.”
Examples of such techniques include artificial tissue engineering for repairing damaged tissues, especially skin grafts.
In conclusion, Professor Sun said research into the manipulation of cells through various techniques offered medical doctors a greater range of insights into understanding how the body works, and how to fight potentially lethal diseases.