The Alumni Function Room at Academic 3 at City University of Hong Kong (CityU) has been named “Eminence Galaxy” in recognition of the generous contributions of the CityU Eminence Society (the Society) to the University. 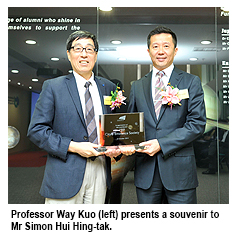 The new name signifies the precious assembly of CityU alumni, who shine in their professions as well as in society, and who unite to support the advancement of their alma mater.
At the naming ceremony on 14 October a huge glass wall decorated with imagery of the galaxy and with the list of donors was unveiled by Professor Way Kuo, University President, Mr Simon Hui Hing-tak, Chairman of CityU Eminence Society, Dr John Chan Chun-tung, Chairman of CityU Eminence Society Fundraising Campaign, Dr Peter Ho Ka-nam, Founding Chairman of CityU Eminence Society, and Professor Roderick Wong Sue-cheun, Vice-President (Development and External Relations).
At the ceremony, Professor Kuo expressed his deepest appreciation to the Society for its unfailing support.
“We are thankful for the monetary contributions from the alumni but the cheque itself is not the most important thing. Behind is something bigger—the friendship, dedication, scholarship and bursaries, mentorship, internship and support for curriculum development,” he said. “This is what makes CityU dynamic and distinct.” 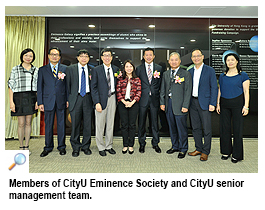 The naming of the alumni function room as Eminence Galaxy was particularly meaningful because 2014 was CityU’s 30th anniversary, said Mr Hui. “It illustrates what senior alumni who have been nurtured by the University over all these years can offer to the further development of the University,” he said.
Alumni were important assets for CityU, and it was a matter of pride that so many were committed to the well-being and future growth of the University, Professor Wong said.
He expressed his heartfelt gratitude for the remarkable support of the alumni, including mentoring students, organising alumni activities, in addition to supporting University development and its new initiatives.
The Eminence Society was established in 2010 by enthusiastic and senior alumni committed to contributing their expertise, networks and resources to benefit the University and serve the community at large. There are currently over 180 members, comprising professionals from a range of industries.
Equipped with advanced audio-visual facilities, Eminence Galaxy has a floor space of 140 square meters and features a balcony with a 270-degree city view. The room is an excellent platform for alumni and University members to network and conduct life-long learning activities that promise to foster an even larger and stronger alumni community.