The President of City University of Hong Kong (CityU) has given two interviews for the programme China Forum on Phoenix Television. 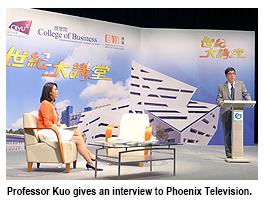 Professor Way Kuo discussed energy strategies and national safety in interviews that took place on 18 September, and higher education and innovation in interviews the next day. He fielded questions from CityU students in the audience, too.
Around 40% of the world’s population lived without electricity, he said, while 60% lived in places where electricity was generated by an energy mix, including water, fossil fuels (coal, oil and natural gas), nuclear, wind, solar, bio, and others. Water, fossil fuels and nuclear counted as the most commonly used energies, he said.
There are pros and cons to the energy mix, Professor Kuo said in the interviews. Coal is reliable but the carbon dioxide produced causes serious air pollution. Solar energy is environmentally friendly but the supply is unreliable. Renewables have a positive impact on the environment but are quite expensive. 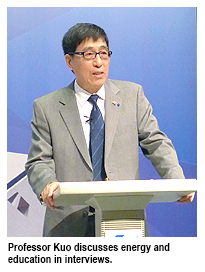 The energy strategies implemented by different countries impact the environment in different ways. For instance, Norway, a country rich in water resources and with a high awareness about environmental protection, has 95% of its energy generated by water and 3% by fossil fuels. The US, a country that emphasises economic development, has 70% of its energy generated by fossil fuels and 20% by nuclear.
Almost 80% of China’s electricity comes from fossil fuels, and the ensuing air pollution causes about 30,000 deaths a year, said Professor Kuo, statistics that had helped compel China to adjust its energy structure. Gradually, as with India and South Korea, China will become a country rich in nuclear energy.
“Any energy strategy is followed by costs and risks. A country should have a comprehensive consideration on its set of energy resources, seeking a balance among energy supply, safety and reliability, environmental protection and economic development,” he said.
Professor Kuo said nuclear energy was a significant choice among the options in the energy mix, but many people worry about the safety aspect. Though the Fukushima nuclear power stations were shut down immediately after the earthquake and tsunami in March 2011, Professor Kuo said complications arose because staff did not cool down the facilities in time. Thus, human error was the root problem. 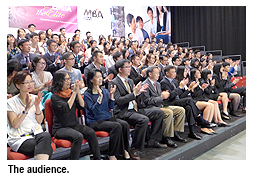 Professor Kuo emphasised that everything had its share of risks. The use of energy was no exception. He expected people to maintain a rational view about sustainable energy use, economic development, safety issues and environmental protection in connection with nuclear power.
Concerning “higher education and innovation”, Professor Kuo said universities could be classified into four categories: 1. the university with an emphasis on humanities; 2. the comprehensive university; 3. the professional university; 4. the university with a single subject.
Most universities in mainland China, Hong Kong, Macau and Taiwan are comprehensive universities, and even universities with a single subject have been transforming into comprehensive universities. Professor Kuo identifies CityU as a professional university.
“A university should have its place. It is the only way to succeed,” said Professor Kuo.
Traditional Chinese culture defines education as a process for propagating doctrine, imparting professional knowledge and resolving doubt. Thus, universities in mainland China, Hong Kong, Macau and Taiwan emphasise teaching with more time spent on classes. On the contrary, universities in the US focus on research with less time spent on classes, meaning students generally have more time to think and create a spirit of research. 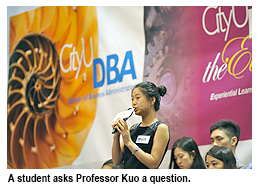 Professor Kuo said, “What I mean by research is to break out of the frame and seek a final answer. It could be an academic paper, a product or a thought.”
Professor Kuo claimed that research benefited teaching, and vice versa, which means that the initial spirit of higher education was the combination of research and teaching. In addition, education should teach students to study natural phenomena in order to acquire knowledge and to innovate, enabling teaching and research to benefit each other.
Professor Kuo added that, in addition to innovation, higher education should focus on academia. Within a university, professors conduct research, and staff perform administration duties. CityU places a great deal of freedom on academia. As President, Professor Kuo said he respected the teaching and research carried out by his colleagues.
“To be a world-class university, we should have our own position, combining teaching and research together and with a freedom spirit for doing research,” he concluded.
In addition, students from the Department of Media and Communication at CityU filmed the two interviews.