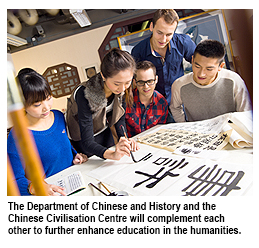 Renowned for its outstanding activities in the humanities, the existing Chinese Civilisation Centre (CCIV) at City University of Hong Kong (CityU) helped to officially launch the Department of Chinese and History on 1 July 2014. Over the past 16 years, the Chinese Civilisation Centre has contributed significantly to the humanities at CityU and the promotion of art and culture, winning acclaim in various communities not only in Hong Kong, but on the mainland and in other regions of Asia.

The establishment of the Department of Chinese and History signifies CityU’s strong commitment and determination to further enhance education in the humanities, which, in turn, can greatly raise our academic standards in relevant disciplines. The new Department and the Centre will complement each other in terms of office administration and the organisation of academic activities.

Starting from 1 July 2014, Professor Li Hsiao-ti is concurrently appointed as Head of the Department of Chinese and History as well as the Director of Chinese Civilisation Centre.