A new design concept for a network of undersea cabling systems developed at City University of Hong Kong (CityU) has received more than HK$3 million in funding from the Research Grants Council (RGC) since June 2014. The network concept is designed to protect Internet traffic in the event of a massive natural disaster such as an earthquake. 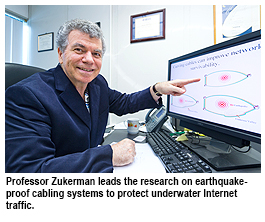 The research project is the first attempt in the world to increase the chances that a network can survive the impact of an earthquake. According to Professor Moshe Zukerman, Chair Professor of the Department of Electronic Engineering at CityU, undersea cabling systems could be protected by properly curving the shapes of the cables taking into account underwater topography, real earthquake effects and cost.

“If the Internet infrastructure was destroyed in China and Hong Kong, it would cost billions of dollars,” said Professor Zukerman. “The economic loss of an Internet blackout is estimated to amount to 1% of GDP per week, according to research in Switzerland in 2005. Today, the costs would be much higher — since the reliance on the Internet has multiplied. Hong Kong’s status as a financial centre would be particularly vulnerable.”

But money is not the whole problem. “Hospitals rely heavily on the Internet to save lives, too,” he added.

The research team will focus on developing design methodologies for cabling systems, the results of which can be used to protect the infrastructure network should a disaster occur.

The team also studies various disaster scenarios, the effects of earthquake characteristics on cable response such as how earthquakes induce submarine landslides, cable response to seismic waves, and where epicentres are likely to exist.

The multinational research team consists of nine academics, including telecommunications experts, earthquake engineers and mathematicians from CityU, Hong Kong University of Science and Technology, Hong Kong Baptist University, University of Hong Kong, and universities in the UK, US and Australia. The team also works in collaboration with an international company which specialises in providing marine survey support.

“I happened to be visiting CityU with Professor Johnathan Manton from Melbourne University in 2006 when the submarine cables were cut after the earthquake. The Internet connection was paralysed for as long as a week, prompting us to look for a preventive solution,” Professor Zukerman said. Professor Manton is the Co-Principal Investigator on this project.

“The blackout was a result of too many cables being laid too closely in the earthquake prone area,” Professor Zukerman explained.

The team has already published a conference paper and a journal paper on a small network scenario, illustrating the trade-off between cost and network survivability. The RGC grant for the upcoming three years will allow the multidisciplinary team to come up with a new methodology and tools for creating a network that can survive, bridging the gap between theory and practice.

According to Professor Zukerman, the network design can be further applied to other cabling networks and disasters such as high-speed railways, gas pipes, electricity lines in the cases of typhoons, landslides, or terrorism, among others.