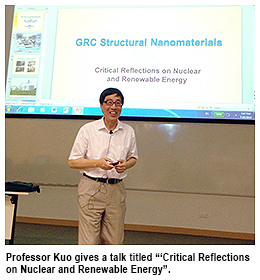 The President of City University of Hong Kong (CityU) gave a keynote address at one of the world’s premier scientific conferences held at The Chinese University of Hong Kong on 20 July 2014.
Around 150 world-class scholars attended the session of the famed Gordon Research Conferences (GRCs) last Sunday where Professor Way Kuo gave a talk titled “‘Critical Reflections on Nuclear and Renewable Energy”.
The audience included leading scientists in the area of structural nanomaterials, such as Professor Subra Suresh, President of Carnegie Mellon University and a member of the National Academy of Sciences, US; Professor Lindsay Greer (University of Cambridge); Professor Julia Greer (California Institute of Technology); Professor C.A. Schuh (Massachusetts Institute of Technology); Professor Chen Mingwei (Tohoku University); Professor Ma En (Johns Hopkins University); Professor Wang Weihua (Chinese Academy of Sciences); and many others.
The GRC was co-chaired by Professor Liu Chain-tsuan, University Distinguished Professor at CityU, and Professor T.G. Nieh from the University of Tennessee, with Professor Lu Jian, Vice-President (Research and Technology) at CityU, and Professor Schuh acting as Vice-Chairmen.
The GRCs are committed to offering high-quality, cost-effective meetings for leading researchers from all around the world. At the meetings, scholars discuss their latest work and future challenges in a uniquely informal and interactive format.
The first GRC was held in a Baltimore classroom in the summer of 1931. Since then, GRCs have expanded to accommodate a growing conference portfolio and are held at different sites each time.