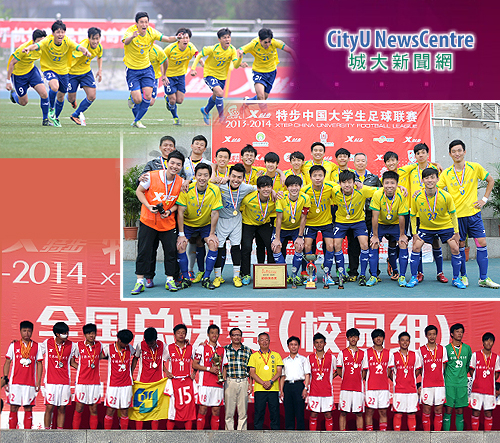 City University of Hong Kong (CityU) men’s soccer team won the Regional Championship in southern China of the China University Football League (CUFL) and also became the 1st runner-up in the college group of the CUFL in the final played on 31 May in Chongqing.

CityU was the only tertiary institution representing Hong Kong in the final eight of this national competition.

The team’s action-packed season finale began with victory in the Southern Region league, which took them and three other winning teams from the same region to Chongqing to compete against the final four from the Northern Region league of the CUFL.

After dominating our group in the round-robin tournament, we reached the semi-final match and defeated Dalian Jiaotong University, the Regional Champion in northern China. Unfortunately, we lost 1-0 to the defending champion Sichuan Engineering Technical College in the final.

Five hundred teams from across China participated in the CUFL. The competition is co-organised by the Federation of University Sports of China (FUSC) and the Chinese Football Association (CFA). It is the only official league for 11-a-side college football in the mainland.

Winning the 1st runner-up position in the CUFL for the second consecutive year, the men’s soccer team showcased the CityU Sports Teams’ spirit of “Be the Best that We Can Be”.