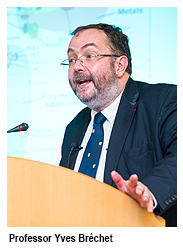 It was the words associated with a French philosopher that concluded a recent in-depth lecture on materials science delivered by Professor Yves Bréchet, High Commissioner for Atomic Energy and Alternative Energies, France.
​“Everything simple is false. Everything which is complex is unusable” is one translation of the famous aphorism of the essayist Paul Valéry that Professor Bréchet offered as food for thought as his stimulating talk in the long-running France-Hong Kong Distinguished Lecture Series on 29 May held at City University of Hong Kong (CityU) drew to a close.
​Indeed, Professor Bréchet’s talk clearly highlighted the history of the development of materials science as a narrative of ever more complex, and ingenious, explorations of naturally occurring materials through to those which humans have created.
​New materials, especially, were now occupying a new paradigm, the speaker said, arguing in his talk how contemporary research was able to supplant customary boundaries between structural and functional materials, drawing together established concepts and notions of materials’ functions and structures.
​“Architectured materials, associating various materials in a controlled geometry, are emblematic of this evolution,” he said, referring to new materials. “They are also a paradigm for the interplay between experiment and modelling to develop a ‘materials by design approach’, which overcomes the limitations of the ‘bottom-up’ strategy.”
In fact, over time, throughout the history of materials, science, from the Stone Age, the Bronze Age and all the way to the Silicon Age, modelling has had to become more complex to cope with the multifunctionality of materials. 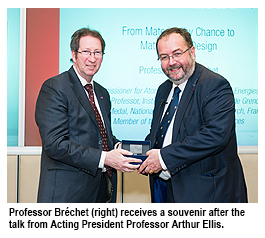 ​This situation today is very complex. “We have lots of materials,” Professor Bréchet said. “We have 50,000 to 80,000 available materials and 3,000 processes for making them!”

The last 15 years have seen an explosion of progress in the field, he said, due in large part to the demand for new materials created by the technological revolution as well as new fields such as eco-design and bio-materials.

​“It is now an open field,” he said, suggesting to students in the audience that areas such as engineering surface materials were promising areas for career development.
He left the new generation of scientists with one last thought, courtesy of the US investor Warren Buffett: It is better to be approximately right than precisely wrong.
Professor Bréchet is also Professor at the Institut National Polytechnique de Grenoble and a Member of the French Academy of Sciences.
A 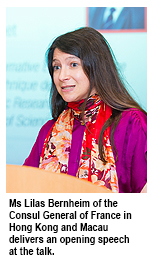 t the talk, Ms Lilas Bernheim, Deputy Consul General of France in Hong Kong and Macau delivered an opening speech in which she said Hong Kong was noted for its materialism, but noted that the audience that day would be hearing a talk about a different kind of materialism.
She also thanked CityU, in particular Professor Philippe Ciarlet, University Distinguished Professor (College of Science and Engineering), for founding the France-Hong Kong Distinguished Lecture Series, which Professor Ciarlet initiated in 2005.
​There were also brief introductions by Professor Arthur Ellis, Acting President of CityU, and Professor Lu Jian, Vice-President (Research & Technology) and Dean of Graduate Studies.