Accidents, food waste and safety in subdivided flats are some of the pressing issues faced by Hong Kong society today. Possible solutions can be found in the Student Project Exhibition organised by the College of Science and Engineering (CSE) at City University of Hong Kong (CityU) from 27 to 28 May.

Some 75 outstanding technology projects showcase how students discovered innovative solutions to such problems, and highlight their affinity with society and current affairs. 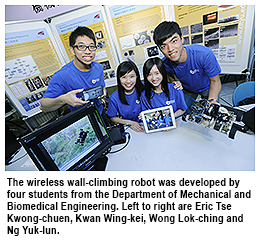 Among the exhibits is a wireless wall-climbing robot developed by Kwan Wing-kei, Ng Yuk-lun, Eric Tse Kwong-chuen and Wong Lok-ching from the Department of Mechanical and Biomedical Engineering. The robot is equipped with a multi-angled camera and a mobile app. By monitoring real-time images, users can direct the movements of the robot using a smart phone. The robot can be used for routine building inspections and is particularly useful in hostile environments such as in collapsed buildings and where there is the risk of power leakages.

Ng Yuk-lin said his team had found developing a product with various technologies to be challenging but that the potential for extensive application had great appeal.

“We were keen to overcome the difficulties,” the student said. “What appeared to be most difficult was trying to understand wall-climbing principles and aerodynamics. We took out the motor from a vacuum cleaner and installed it in the bottom of the robot to enable it to move over the walls and ceilings. During the production process, we applied our knowledge of mechanical and electronic engineering and wireless control commands, and we also developed a mobile app. The robot can be used in many different situations, for example in rescues and the inspection of building structures.” 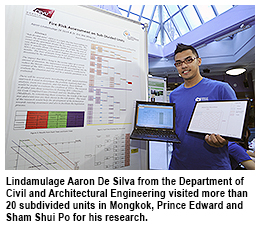 The final-year project of Lindamulage Aaron De Silva, a student from the Department of Civil and Architectural Engineering, is titled “Fire Risk Assessment on Subdivided Units”.

“As there are often news reports on death tolls of fire accidents in subdivided flats, I hoped to reduce the fire risk by using my professional knowledge,” he said.

For his project, Aaron pretended to be a potential tenant and visited more than 20 subdivided units in Mongkok, Prince Edward and Sham Shui Po. He classified the fire risk under three categories: “Poor (current situation of most flats)”, “Acceptable (safety requirements complied)”, and “Good (improvement work done)”. His analysis showed that the installation of fire extinguishers, smoke detectors and heat detectors, together with a strict ban on ignition (including lighted incense and cigarettes), could reduce the fire risk in those “Poor” units by 71.4%.

The government currently does not have any rules or regulations for subdivided flats. Aaron said he hoped the government could pass legislation on safety guidelines for these units as soon as possible. In the interim period, he said he hoped landlords and tenants could introduce some simple measures to improve safety.

Lai Choi-yee, a student from the Department of Mechanical and Biomedical Engineering who interned at an airline catering services company, halved the time it took to prepare fruit boxes for airline passengers by applying her academic knowledge. She re-designed the cold storage and revised the preparation process. Her initiative has not only enabled passengers to taste fresher food but also reduced kitchen waste. In addition, she suggested that the company could try combining the two procedures for preparing food and packaging in order to reduce stock and streamline the workflow.

“The number of passengers provided by airlines often changes,” she said. “By significantly streamlining the workflow, we can prepare more accurate quantities of food and reduce kitchen waste.” She smiled and said appearance alone does not convey freshness, but that fruit prepared on the same day as the flight would definitely taste better.

The exhibition is being held from 2:00pm to 6:00pm in the Purple Zone in CityU’s Academic 1. All items on display are student projects from the eight departments in CSE as well as from the Division of Building Science and Technology and the Co-operative Education Centre.

During the exhibition, CSE students are on hand to talk about the ideas and features behind the projects and demonstrate how to use the products.