The door to a new generation of technologies? 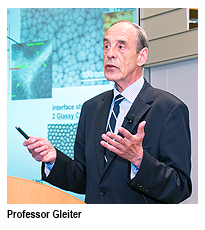 Nanoglasses exhibit a variety of new and technically attractive biological, magnetic, mechanical and electric properties that could lead to what the speaker at the latest City University Distinguished Lecture referred to as the “glass age”.

Professor Herbert Gleiter, Senior Member and Institute Professor of the Institute of Nanotechnology at Karlsruhe Institute of Technology, gave his talk, titled “Nanostructured Solids—From Nanoglasses to Quantum Transistors: The Door to a New Generation of Technologies?” on 14 May in front of a packed audience.

The essential idea presented by Professor Gleiter, whose contributions to physics and nanotechnology have been cited more than 18,000 times and have achieved the highest citation impact score in Materials Science in Germany, and are number two in Europe, is that today’s science and technology could be revolutionised by new approaches to exploiting glass at the nano level.

“Modern technology is based on the fact that the properties of crystalline solids can be controlled by modifying their atomic structure, e.g. by structural phase transformations or by introducing lattice defects and/or by varying their chemical composition, e.g. by alloying/doping,” explained Professor Gleiter, who has received more than 40 prizes and awards, including the Leibniz Prize, the Max Planck Research Prize, the Gold Medals of Acta Materialia and of the Federation of European Materials Societies, the 2008 Staudinger-Durrer Lecture Award of the Swiss Federal Institute of Technology, and in 2009 the Blaise Pascal Medal of the European Academy of Sciences. 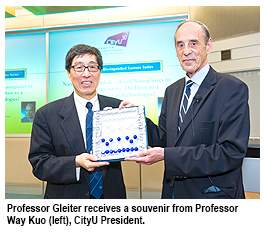 Such modification is not possible with today’s glasses because their atomic structures and their chemical compositions are given by the structures/compositions of the corresponding rapidly cooled melts at the glass transition temperature.
But nanoglasses are a different case.
“It is the novel feature of nanoglasses that they open the way to generate solids with non-crystalline atomic structures and with chemical compositions that differ from the atomic structures and the chemical composition of the glasses available today,” explained Professor Gleiter.
The possibilities are endless, with significant applications to be found in a variety of technologies due to the new biological, magnetic, mechanical and electric properties of nanoglasses.
“Nanoglasses were noted to be more ductile, more biocompatible, and catalytically more active than the corresponding melt-quenched glasses. Hence, this new class of noncrystalline materials may open the way to technologies utilising the new properties,” he said.
We are on the edge of a new era in technology, the speaker argued, citing previous historical examples such as the birth of the bronze, iron and semi-conductor eras.
“The discovery and the new properties of nanoglasses may also open the way to a period of mankind characterised by an age of new technologies utilising the novel properties of nanoglasses, i.e. a kind of ‘glass age’,” he said.
As a caveat, though, he added that economies of scale meant someone needed to invest a huge amount of money in the nanoglass industry to make production economically feasible.