Sir David Akers-Jones, President of the Business and Professionals Federation of Hong Kong, and Dr Chan Sui-kau, Founder of Yangtzekiang Garment Limited, presented the awards to the winners. Other guests included Dr Norman Leung Nai-pang, Pro-Chancellor of CityU and Chairman of the Panel of Judges of the 3rd Distinguished Alumni Award; Mr Joseph Pang Yuk-wing, Treasurer of the University; and Professor Way Kuo, CityU President. 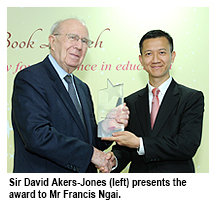 “I obtained my first degree here at CityU,” Mr Ngai said. “CityU nurtured me with professional knowledge. More importantly, the free culture here inspired me to think out of the box. I always discussed our social responsibilities with my schoolmates during my school days. We were determined to live our lives to the fullest and pursue our dreams.”

Mr Ngai is also an ultra-running veteran. He finished the North Pole Marathon 2013 and covered 250 kilometres in an ultra-marathon challenge in the Gobi desert in 2012. Being a Global Marathon Ambassador, he supported the organisation of the CityU Delegation for the Gyeongju Cherry Marathon in South Korea held on 5 April.

Mr Ngai’s achievements and contribution have been recognised with various awards. He was conferred as an Honorary Fellow at CityU in 2013, selected as a Young Global Leader of World Economic Forum in 2012, and one of the Ten Outstanding Young Persons in Hong Kong in 2011.

However, Mr Ngai is not complacent about his achievements. “I will think about more social innovation projects to let students understand society’s needs, raise public awareness about the needs of different people, and work for the betterment of society.” 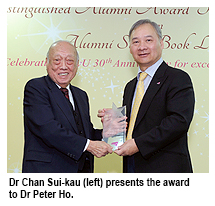 Another awardee, Dr Ho, said at the ceremony that the award had a deep meaning to him. “I am honoured to receive this award at the milestone of my alma mater which is celebrating its 30th anniversary. The great strides made by CityU were the fruition of concerted efforts from all staff, students and alumni,” he said.

Dr Ho is a renowned manufacturer of quality chargers, power supplies and home automation electronic products, and is the Managing Director at Techworld Industries Limited.

Dr Ho obtained his master’s and doctorate degrees in engineering management at CityU. Since his graduation, Dr Ho has been making significant contributions to the University and the industry. He serves as the Founding Chairman of the CityU Eminence Society, Director of CityU Research Limited, Patron of the CityU Business and Industrial Club (CUBIC), and Chairman of CUBIC’s Consumer Electronic Group. He plays an important role as a bridge between the University and the industry through promoting technology transfer.

In addition, Dr Ho has made generous donations to the University in support of the Industrial Attachment Scheme and student scholarships through the CityU School of Graduate Studies.

In recognition of Dr Ho’s staunch support, he was bestowed the title of Honorary Fellow of CityU in 2009. Lecture Theatres 10 and 12 of CityU were named after him and his parents, i.e. the Peter Ho Lecture Theatre and Mr & Mrs Ho Chun Hung Lecture Theatre. 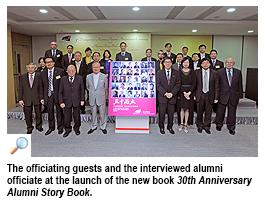 “I will continue to go hand-in-hand with CityU faculty and members of the CityU Eminence Society to work for the development of CityU. I am confident that CityU will break new ground and propel itself onto the next level of excellence,” Dr Ho said.

Thirty outstanding CityU alumni from the past 30 years shared their success stories in the new book 30th Anniversary Alumni Story Book which was launched at the event. Among them were Mr Rimsky Yuen Kwok-keung, Secretary for Justice, Ms Christine Loh Kung-wai, Under Secretary for the Environment, and others from a host of different professions, including Mr Simon Hui Hing-tak, a successful businessman; Mr Desmond Chan Shu-hung; a seasoned media executive; Dr Kenji Yum Tsz-yin, an outstanding engineer and business development professional; and Ms Heiward Mak Hei-yan, an award-winning screenwriter and film director. All proceeds from the book will be used to support student development programmes.