Unity amid sea of cherry blossom 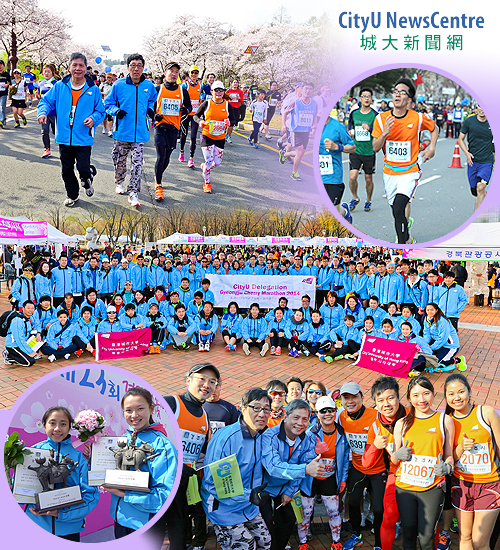 Surrounded by a spectacular array of spring colours, over 100 students, staff and alumni from City University of Hong Kong (CityU) demonstrated sportsmanship and unity at the Gyeongju Cherry Marathon 2014 in South Korea on 5 April.
One hundred and two students, staff and alumni ran the full marathon, half marathon, and the 10-kilometre or 5-kilometre races. The team was led by Professor Way Kuo, University President, and supported by the Eminence Society, a distinguished CityU alumni group.
Fan Ka-king, a student from the Department of Marketing, and Wong Wing-yee, a student from the Department of Mechanical and Biomedical Engineering, won fifth and sixth prizes in the women’s 10-kilometre race. They said it was such a memorable experience representing the University in South Korea in a competition held under clouds of beautiful cherry blossom.
CityU’s participation was arranged by an Organising Committee comprising colleagues from the Alumni Relations Office, Student Development Services, the Department of Management, the Human Resources Office, and Campus Development and Facilities Office. Mr Chan Ka-kui, CityU Council member, was the Honorary Advisor for this event.
“I would like to express my thanks to the CityU community, especially the alumni for their generous donation,” Professor Kuo said, adding that he was very proud that the staff and alumni had showed good sportsmanship and revealed the spirit of unity at CityU.
CityU participated in the race in South Korea as part of its 30th anniversary celebrations. This was the second time that CityU runners had competed in a marathon outside of Hong Kong, following the Taipei Marathon in 2012.
“I would like to thank alumni, staff and students for their support, and the members of the organising committee for their efforts. I was very pleased to witness the wonderful camaraderie of the CityU community at the event,” said Ms Kathy Chan Yin-ling, Associate Vice-President (Alumni Relations) and Chair of the Organising Committee.
“Running a marathon is the test of endurance and perseverance. CityU’s marathon athletes tried their best and broke through themselves. These are the commendable gestures of sportsmanship,” said Mrs Dorothy Davies Wong Ka-yiu, Associate Director of Student Development Services and Co-Chair of the Organising Committee. “The event can further enhance the sense of belonging to CityU and highlight the team spirit and the healthy image of the University.”