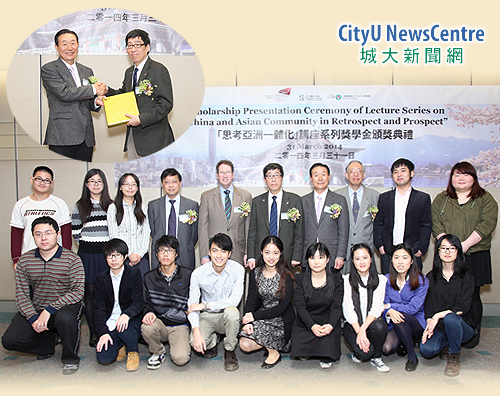 The Department of Chinese, Translation and Linguistics of City University of Hong Kong (CityU) held the final lecture cum closing ceremony for the lecture series “China and Asian Community in Retrospect and Prospect: Thoughts and Culture” on 31 March.
The lecture series, which was sponsored by One Asia Foundation, presented 15 talks by distinguished and reputable scholars from all over the world. Running from September 2013 to March 2014, the talks explored mutual exchanges and the integration of Asian countries in the past, present and future, with a focus on their economies, education, politics and culture.
The series concluded with the final lecture, “The World will Become One in the Near Future”, presented by Mr Yoji Sato, Chairman of One Asia Foundation.
Officiating at the ceremony were Mr Sato, Professor Way Kuo, University President, Professor Arthur Ellis, Provost, and Professor Dennis Wong Sing-wing, Associate Dean of College of Liberal Arts and Social Sciences.
Professor Kuo said at the ceremony, “We greatly appreciate Mr Sato and One Asia Foundation for their care and concern for the current political situation of the world, in particular their tremendous contributions to the future sustainable development and the possibility towards peaceful co-existence among all nations in Asia.”
In addition to a grant of JPY5,000,000 (HK$395,550) to organise the lecture series, One Asia Foundation donated JPY600,000 (HK$47,296) to CityU towards an academic review essay competition. Awards were presented to 14 winning students by Mr Sato, Professor Kuo and Professor Ellis at the ceremony. The winning essays will be published together with the papers produced from the 15 lectures.