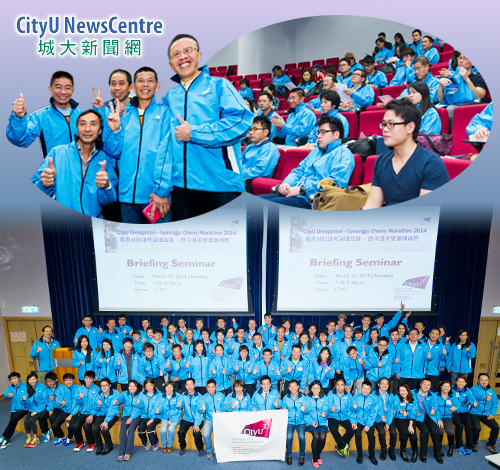 Over 100 students, staff and alumni from City University of Hong Kong (CityU) will be taking part in the Gyeongju Cherry Marathon 2014 in South Korea on 5 April.
This will be the second time that CityU has formed a team to compete in a marathon outside of Hong Kong, following the Taipei Marathon in 2012.
One hundred and two students, staff and alumni will run the full marathon, half marathon, and the 10-kilometre or 5-kilometre race. The team will be led by Professor Way Kuo, University President, and supported by the Eminence Society, a distinguished CityU alumni group.
CityU is competing in the race in South Korea as part of the University’s 30th anniversary celebrations. CityU’s participation has been arranged by an Organising Committee comprising colleagues from the Alumni Relations Office, Student Development Services, the Department of Management, the Human Resources Office, and the Campus Development and Facilities Office. Mr Chan Ka-kui, CityU Council member, is the Honorary Advisor for this event.
“CityU has a strong marathon team competing in the Gyeongju Cherry Marathon,” Professor Kuo said. “Our participation will help promote a global image for the University and foster unity among the CityU community.”
CityU alumni and experienced runners Mr Francis Ngai Wah-sing and Mr Kason Fok Ka-shing will join the delegation. They braved temperatures of minus 30 degrees Celsius to complete in the UVU North Pole Marathon last year.
“I am very excited to run the marathon, together with President, staff, our CityU brothers and sisters, and hope to promote a positive message,” said Mr Ngai. The members of the delegation will also include CityU students who performed well in this year’s Standard Chartered Hong Kong Marathon.
​​