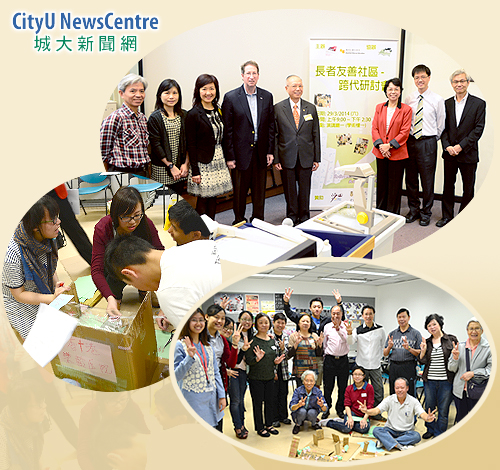 The elderly and young people interacted and shared their views on issues about developing an age-friendly city at the Intergenerational Symposium on the Age-friendly City held at CityU on 29 March.
The symposium, organised by CityU’s Department of Applied Social Studies with support from Elderly Academy, aims to raise public awareness of an ageing society and develop the Age-Friendly Cities Programme initiated by the World Health Organisation.
Over 150 elderly and young people were placed in different groups to work together and design models with age-friendly features for universities, shopping malls, parks, hospitals and MTR stations. After consolidating the ideas of the participants, CityU will submit a proposal to relevant government departments for their consideration.
Officiating guests at the opening ceremony were Professor Arthur Ellis, CityU Provost, Professor Lo Tit-wing, and Dr Alice Chong Ming-lin, Head and Associate Professor from the Department of Applied Social Studies, respectively. They were joined by representatives from sponsor organisations, including the Rotary Club of New Territories, the Rotary Club of Shatin and LCH Charitable Foundation.
Following the opening ceremony, Mr Ma Kam-wah, Chairman of the working group on active ageing of the Elderly Commission, and Mr Benson Ng Yuk-ming, Chairman of the sharing and training working group on the age-friendly city in Hong Kong (2013-2014), shared their experience of promoting an age-friendly city.